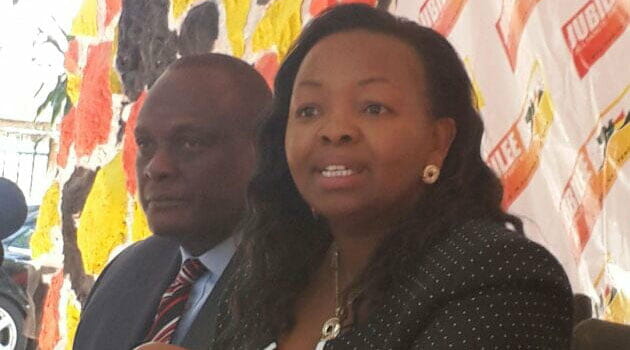 The Jubilee Alliance Party (JAP) on Thursday said it will conduct joint nominations for the Kabete Parliamentary seat and the Oloolua Ward in Kajiado North Constituency.
Speaking at the party headquarters in Lavington, JAP vice Chair David Murathe said The National Alliance (TNA) Party, the United Republican Party (URP) and other constituent parties will not be allowed to field individual candidates for the two seats.

“There is no way TNA or URP can for example produce a candidate because that candidate will not be on the ballot. There will be a joint nomination and the winner of that nomination will be the candidate for the JAP,” he stated.

His remarks were promoted by a section politicians allied to JAP who have said they will field URP and TNA candidates to contest in the two elective seats slated for May 4.

She explained that the completed forms should be returned to the JAP headquarters in Lavington on March 5 before the secretariat holds a consultative meeting to discuss modalities of the nominations.

The consultations will also involve setting up a date for conducting the party nominations.

She explained that the two seats had elicited a lot of interest with over 25 people already showing interest for the Kabete parliamentary seat.

She however urged candidates to ensure they adhere to the electoral code of conduct which JAP will follow during the nomination process.

Maina also announced that JAP will hold a national delegates conference in due time in preparation and readiness for its party affairs.

Further, plans are underway to publish names of country coordinators who will be responsible for rolling out the party’s programme.

JAP was launched on January 16 bringing together President Uhuru Kenyatta’s TNA and Deputy President William Ruto’s URP to mend waning unity among members of the two parties initially under the Jubilee umbrella.