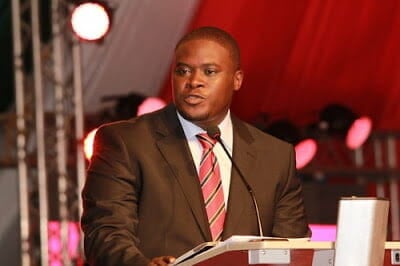 It is now official: President Uhuru Kenyatta’s TNA party chairman Johnson Sakaja is headed for change of politics as 2017 draws closer towards the general elections.
The 30-year-old nominated MP, who participated in the formulation of the constitution before its promulgation in 2010, is no longer sitting on the laurels and is now seeking an elective post.
Moving away from the nasty and dirty politics of Nairobi city, Sakaja is switching to his Trans Nzoia home turf to try his luck.
And to confirm his participation in the Trans Nzoia politics, the TNA chairman was last week held up in meetings and tours in Saboti constituency which is being held by New Ford Kenya’s NFK Lazaro Wafula.
This brings to an end apprehensions that the nominated legislator would go for Endebess constituency being represented by Robert Pukose of URP.
“What I want to do to my Saboti home people is what I have been doing at the national level,” that was all Sakaja said when asked about his new adventure and undertaking.
As Sakaja moves his politics to Trans Nzoia, another Trans Nzoia politician Eugene Wamalwa was heading to Nairobi to take up his position as the cabinet secretary for Water and Irrigation. Eugene has temporarily stepped aside as the NFK party leader, leaving the seat to the Bungoma governor Kenneth Lusaka.
Politics in Trans Nzoia is party dictated by the Ford Kenya leader and Bungoma senator Moses Wetang’ula who has a sizeable influence.
William Ruto’s URP is second to NFK and it will be interesting to see how Sakaja fronting for the amalgamation of TNA and URP for Jap will play his cards on the newly-found platform in Trans- Nzoia.
The one million dollar question is: “Will Sakaja’s entry into the murky political waters of Trans Nzoia tilt the county politics in 2017?”
Sakaja’s immediate headache is whether the conglomeration of Jap will be accepted to all the interested TNA and URP aspirants in the county. Kanu which is rebranding itself within the Rift Valley region could reap from the split of Jap.
“I don’t know to do it but I will find out. I want us to have a state in this county where everybody knows that he/she is being taken care of. The level of tribalism disturbs be a lot,” he was quoted in a local media.
It is too early to tell whether or not Eugene’s NFK will join the Jap bandwagon but it is imperative to note the two parties would rather work together to clinch victory in 2017, although the Water and Irrigation cabinet secretary has no soft landing for DP Ruto’s URP.
Eugene is still glossing over whether he should pursue national politics or confine himself to the Trans-Nzoia county politics by attempting to oust the incumbent Governor Patrick Khaemba. Sources confided that the former Justice minister was considering vying for the Nairobi city gubernatorial seat held by Evans Kidero as he prepares for the presidency in 2022. Other sources said the ex-Saboti MP was considering the Trans Nzoia senatorial slot of FK’s Henry Ole Ndiema or the speaker’s slot in the national assembly as a prelude to the presidency.
These are some of the contentious issues Sakaja will be putting to test as he settles down to extend Jap’s tentacles in Trans Nzoia. He will have to contend with the fact that should Eugene plan ahead with national politics, secondary school principal Cosmas Nabongolo who has emerged the favourite candidate to unseat Khaemba.
Though deputy governor Stanley Tarus has emphatically tried to defend and sell his boss, Khaemba’s fate seems to have already been sealed. He is grappling with poor decision- making maladministration, nepotism and lack of inclusiveness.