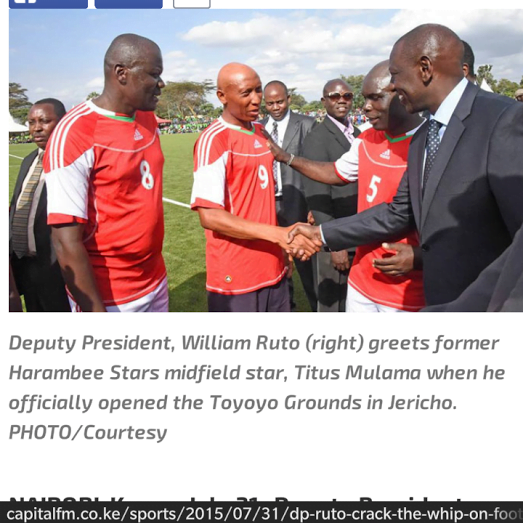 In our fourth part of the brewing corruption scandal at the body formerly referred to as Sports Stadia Management Board (SSMB), we make the most damning of revelations yet.
OpenSide Sports UK Limited, which we have recently exposed as a fraud that has costed taxpayers over Kshs. 50 Million in losses, has met Deputy President William Ruto at his Karen residence, not once but severally.
In the first meeting, during the second half of 2013, Deputy President William Ruto met the entire team of OpenSide Sports, including the Britons led by their CEO Archie Paton.
OpenSide Sports is the company that was irregularly awarded a contract by Sports Stadia Management Board, and the Ministry of Sports then under Ababu Namwamba and James Waweru, to arrange international matches, aimed at boosting the country’s tourism and international profile.
OpenSide Sports is neither licensed by FIFA as a match-agent, and the individuals who were introduced to Kenya do not work for the English Premier League or Barcelona, as claimed by SSMB CEO Gabriel Komora. They are UK-based conmen.
Flying in 5 Britons to Kenya on Business Class costs Sports Kenya over Kshs. 1 Million, meaning more strain on resources being spent on a group of British conmen.
In recent months, Kenneth Mathiu has also been meeting the Deputy President at both his house and at his office.
Speculation is rife that with the advance payment of USD 500,000.00 given to him by Sports Stadia Management Board CEO Gabriel Komora, Mathiu shared some of the money with former sports minister Ababu Namwamba, former sports PS James Waweru, and Deputy President William Ruto.
But in typical corrupt-fashion of the old men ruining this country, there was never, and still is no intention of bringing top teams to the country for the Magic Cup Tournament. The main intention is to loot public coffers and use a foreign company to justify the expenses.
Little wonder why a vehicle dealer Pewin Supplies Limited’s Peter Kirugua and a golf manager, Karen Golf and Country Club Manager Sam Mwai have partnered with UK-based conmen, to launch bid for a project which will never see the light of day. And they are doing it with official patronage of Deputy President William Ruto.
Over and above Ruto’s link, Peter Kirigua is a man with unlimited access to Statehouse, being the current Chairman of Kenya Forest Service.
OpenSide Sports was engaged during the tenure of Ababu Namwamba in 2012, and up to date has never delivered on their mandate, despite being paid all necessary downpayments.
The irony of all this is that the last bastion of youth, is being invaded by the same old-men corrupt cartels, operating under the flagship of Deputy President William Ruto, in a government that claims to empower the youth, while at the same time, killing projects that would build the country’s football to greater heights of prosperity.
Deputy President William Ruto’s greed is immeasurable, and is a master of saying one thing and doing the exact opposite. He was recently quoted in the media as asking football officials to up their game, while at the same time, entertaining conmen in the name of OpenSide Sports, in a bid to loot government coffers.
Would you like to get published on this Popular Blog? You can now email Cyprian Nyakundi any breaking news, Exposes, story ideas, human interest articles or interesting videos on: [email protected] Videos and pictures can be sent to +254 710 280 973 on WhatsApp, Signal and Telegram.