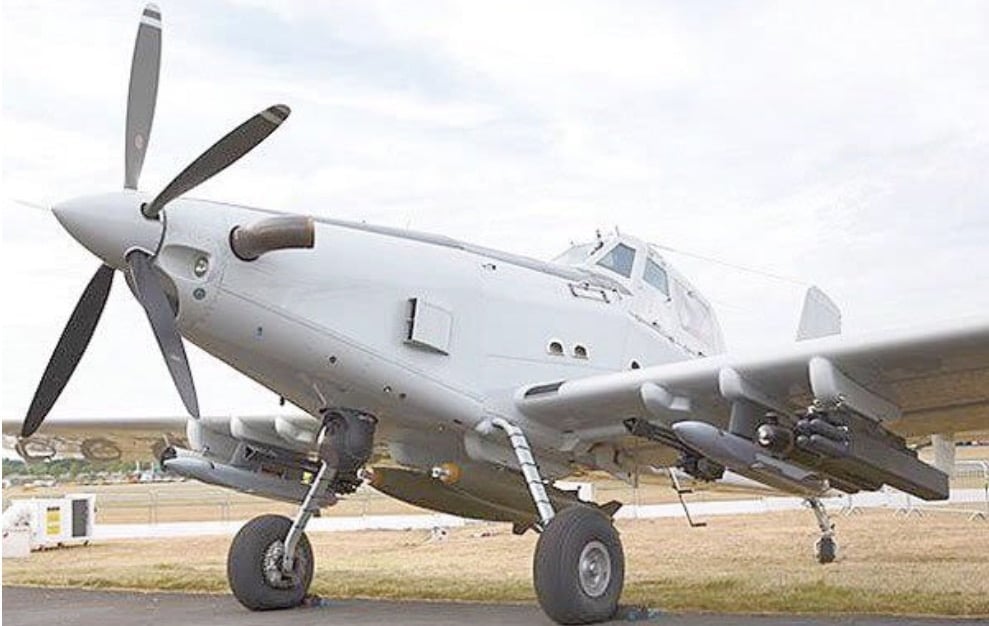 CAPTION: The modified agricultural aircraft Kenya is spending 40 Billion for, yet Doctors are only asking for 8 Billion raise in their salaries. What they use for crop-dusting is what we are depleting our cash-reserves to acquire under the guise of “fighting” Al Shabaab.

The Air Tractor AT-802 is an agricultural aircraft that may also be adapted into fire-fighting or armed versions. It first flew in the United States in October 1990 and is manufactured by Air Tractor Inc. The AT-802 carries a chemical hopper between the engine firewall and the cockpit and another one under the belly. In the U.S., it is considered a Type III SEAT, or Single Engine Air Tanker.

But the Kenya Airforce (KAF) had not initially wanted to purchase these Air Tractors, and were instead seeking to upgrade their transport aircrafts.

The Kenya Government has misused the war against Al Shabab to perpetuate flagrant abuses on human rights, plus embed corruption under that guise. They realised how susceptible the United States Government is when it comes to its catchword “terrorism” and have used this line to bait and blackmail them into accommodating their greed for money.

Yet various occurrences show that it’s the Head of State who ignored advanced-intelligence, to almost want these terrorist attacks to happen so as to solicit cheap-sympathy and use the “cause” to seek support from Western countries. He was on a flight to go merrying in Abu Dhabi in the height of a terrorist attack, while in another instance, he continued meeting KEPSA corporate extortionists while students at Garissa University were being slaughtered, and didn’t provide transport to the elite Recce Squad.

On 19 January the US Defence Security Cooperation Agency (DSCA) notified Congress of the possible sale of up to twelve Air Tractor AT-802L and two AT-504 trainer aircraft, weapons, technical support to Kenya in a deal that could be worth up to $418 million.

The prime contractor in this fishy deal would be L-3 Communications, Platform Integration Division, Waco, Texas. The AT-802L Longsword, developed in conjunction with L-3 and Air Tractor, is based on the previous militarised AT-802U, but features a number of improvements.

But prior to this announcement made a few hours before President Barrack Obama handed over office to Donald Trump, the Kenya Airforce had embarked on a three year scouting mission for the best transport aircraft including attending airshows.

The Kenya Air Force had attended airshows in Africa, (Nigeria and South Africa) and the rest in Dubai, Farnborough (England), Le Bourget (Paris), Airshow China 2014, among others.

The main reason was to scout for new aircrafts, mainly to be used for transport, since KAF’s Buffalo aircraft squadron was unable to service this huge transport aircraft anymore.

By then, Gen J Otieno, currently Kenya’s Ambassador to Egypt was the commander of the Kenya Air Force.

During these visits to the Air Shows, the command had settled for a Bombardier Aircraft but immediately after change of guard, when Gen Otieno and Karangi were sacked by President Uhuru Kenyatta, the tune changed.

General Samuel Thuita, current commander KAF took over and changed the all processes and recommended Air Tractors and Hugh Helis after sending his stooge to the US. 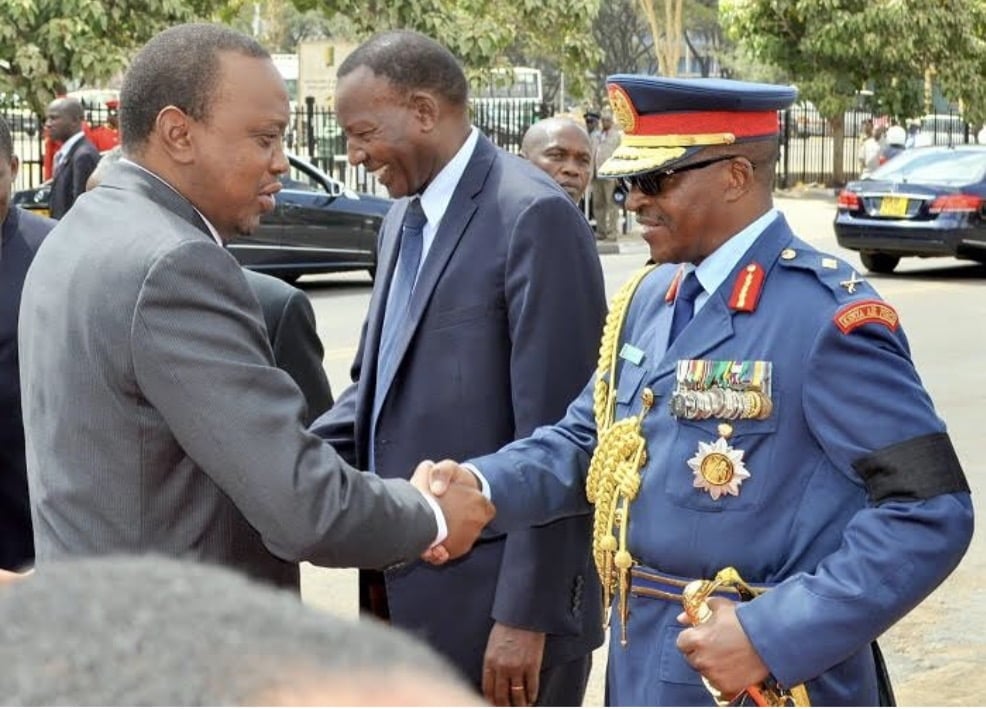 According to highly placed military sources, Samuel Thuita was appointed to front the interests of President Uhuru Kenyatta in these high-level purchases. The trio who maneuver these deals with direct communication and under the direction of the President include Defence Cabinet Secretary Raychelle Omamo, Treasury Cabinet Secretary Henry Rotich and Solicitor General Njee Muturi. The trio are routinely spotted at five-star hotels in Nairobi, wining and dining on boutique cuisine and choice drinks, while negotiating cuts from these deals.

This trio should by now be banned from entering the US for corruption, if this socialite-ambassador Robert Godec could do his job, instead of just hosting animal rights-activists and civil-society for cocktail parties at his residence. 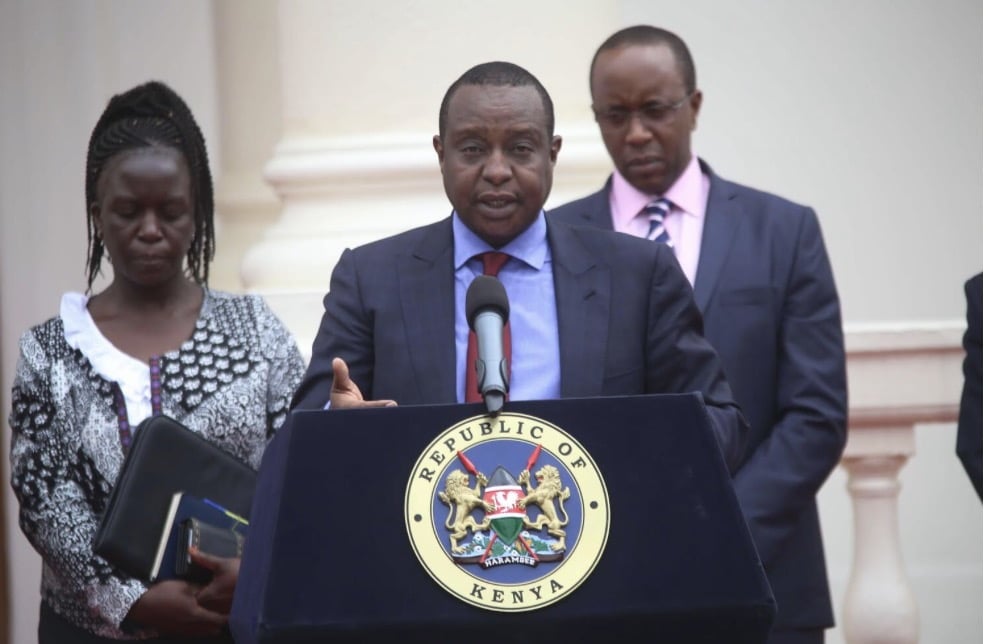 CAPTION: Henry Rotich flanked by Njee Muturi whose name we have been bumping into of late. It’s not good to have your name on the radar of bloggers. You can never win that fight Mr. Njee.

We are in possession of correspondence dating back to 2013, where the proposal to upgrade the transport fleet of the KAF was mooted. One is from China and another from France’s Eurocopter, through the Military Attache of the French Embassy in Nairobi.

Indeed, to prove that this was a shoddy deal typical of everything which has happened under the tenure of Uhuru Kenyatta, the thief who has left his mother to run the country while portraying his Deputy William Ruto as the high-priest of corruption, the deal has been questioned by the US Congress. Uhuru has been portraying himself as the “helpless” President under-siege from Ruto, so that he can project the hopeless Kalenjin as the High Priest of Corruption through his Statehouse propaganda outfit.

A US congressman has asked for the sale of 12 Air Tractor aircraft to Kenya to be halted while allegations of faulty contracting practices, fraud, and unfair treatment are investigated.

On 14 February US Representative Ted Budd introduced a resolution to halt the Foreign Military Sale of the Air Tractors to Kenya. “The proposed sale would reward a $13 billion company L-3 that has never produced airplanes of this type and would cost $283 million dollars more than a small business in North Carolina Iomax, which is currently producing the needed aircraft,” Budd stated.

“This is at least the third instance the disabled veteran-owned NC contractor Iomax was passed over, despite its ability to deliver a more cost-effective option.

“My office has received credible allegations of faulty contracting practices, fraud, and unfair treatment surrounding this sale. Given that this proposed contract was decided without competition, to a company that has no experience or track record producing this kind of aircraft, and for a price that is more than double what a contractor in our district has quoted, further investigation is definitely in order.

“The resolution I introduced today would halt this sale, and give the Congress time to look into these troubling allegations. We need to ensure that Kenya, a longtime ally, is getting a fair deal, and that veteran-owned small businesses in our state aren’t getting shut out of competition because of government favouritism towards giant contractors.”

Budd said that Iomax claims it can fulfil the contract for $180 million, and it has 48 weaponized border patrol aircraft in service, as opposed to zero for L-3. Politico notes that if adopted, Budd’s measure would be the first time Congress votes to block a foreign arms sale since 1986. His resolution has been passed to the Committee on Foreign Affairs.

Attached, see correspondence to show that communication with various companies had commenced, and that this Air Tractor deal was a last-minute afterthought by people intending to defraud both the Kenyan and American people.

We have concealed telephone numbers and email addresses for the French Military Attache at their Nairobi Embassy, and also contacts of the Eurocopter officials as a gesture of goodwill, for future business collaboration. We have also blurred contacts of Chinese Military supplier Catic on the same grounds.

The question is, why must all our tax money be going to purchase suspect military hardware under the guise of “fighting” Al Shabab? Isn’t this line becoming stale? Why is the US Government allowing this transaction to go through?

We have unsuccessfully tried to contact the Kenya Airforce for clarification to no avail. We also welcome other interested parties to provide us with any extra information. We advise the Airforce Commander to not hire bots like Dennis Itumbi to run parallel campaigns otherwise we will reveal even more damning reports if he does so, which will be damaging to his career and the image of the Airforce.

We are tired of this Jubilee propaganda machinery! 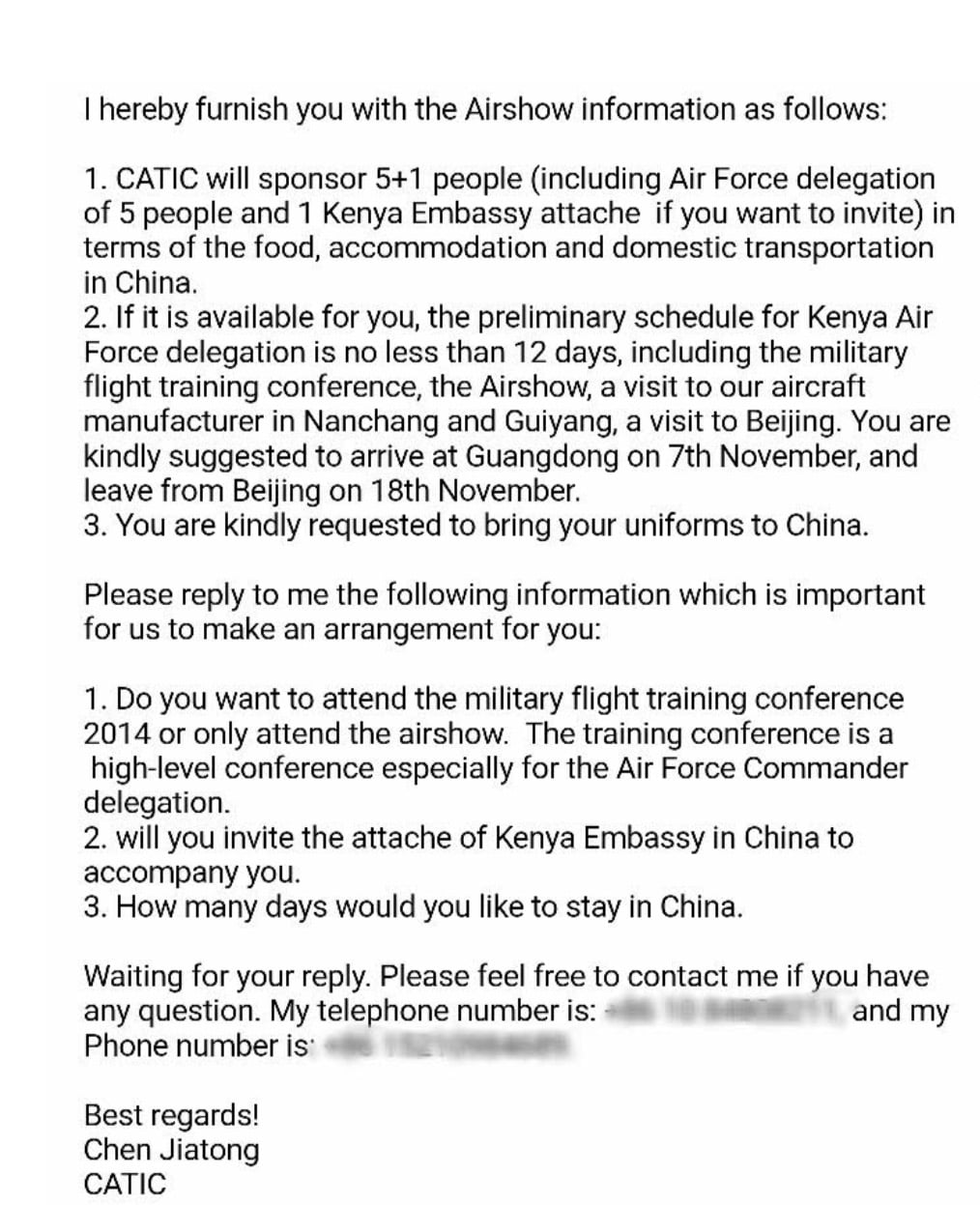 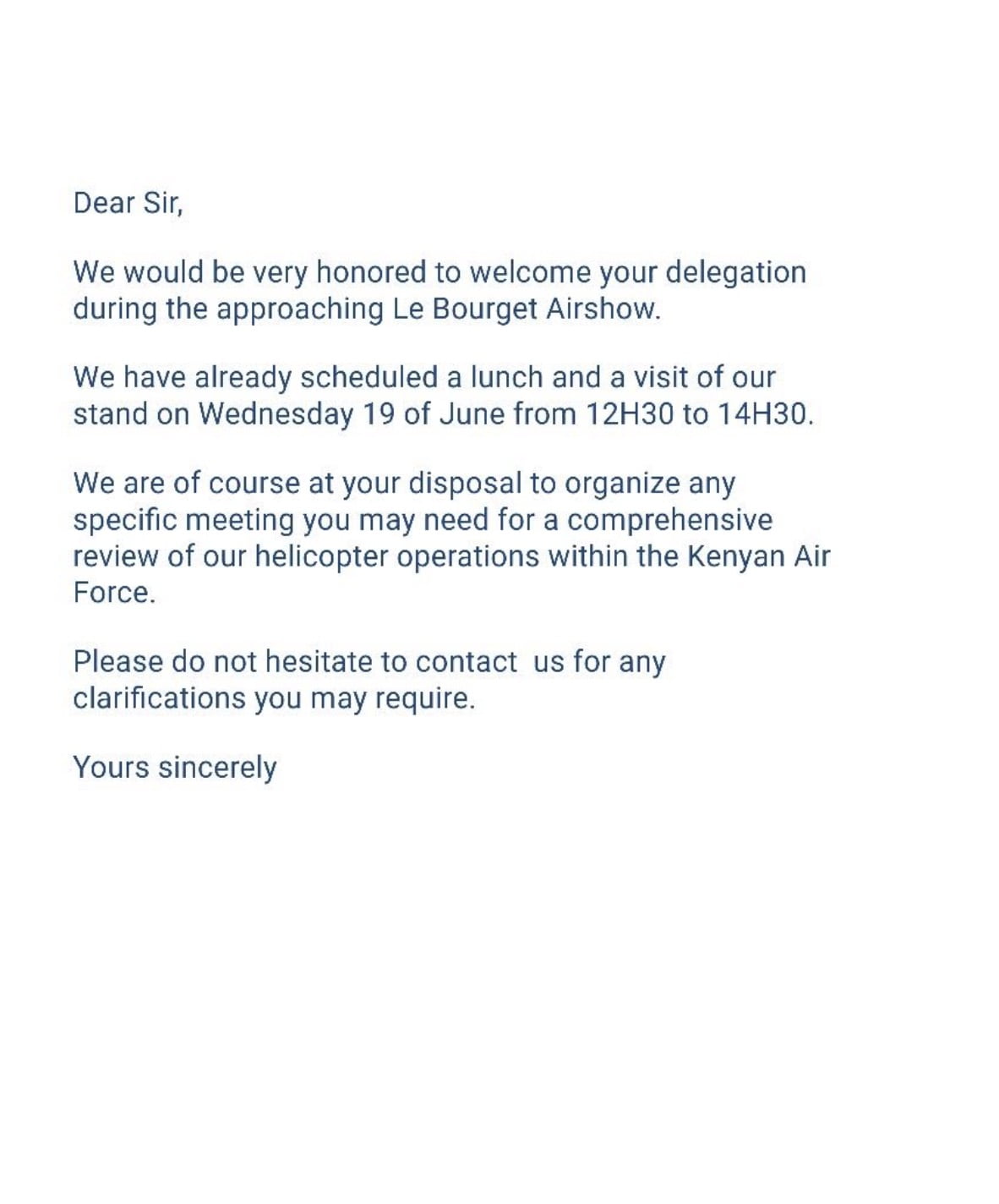