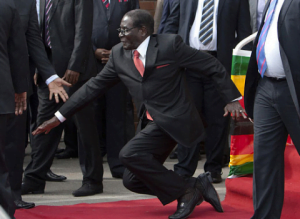 There is no sufficient evidence that Zimbabwe’s President Robert Mugabe fell on Wednesday, an official has said.

Zimbabwe Information minister Jonathan Moyo said Mugabe only tumbled when he tripped over a “hump” on a carpet at Harare International Airport.

Moyo described reports of the fall off a dais as “morbid celebration”, saying Mugabe broke it without any help.

He noted that other world leaders “from Jesus to George W Bush” also fell down.

Images of Mugabe losing his footing and landing on all fours surfaced after his arrival from the 24th African Union Summit in Addis Ababa.

He had just finished addressing supporters at the airport and was walking down a staircase when he fell.

His security detail escorted him to a waiting limousine which sped off after he was helped into it.

Some journalists who took photos of the fall were forced to delete them. Others posted them on social media causing a stir.