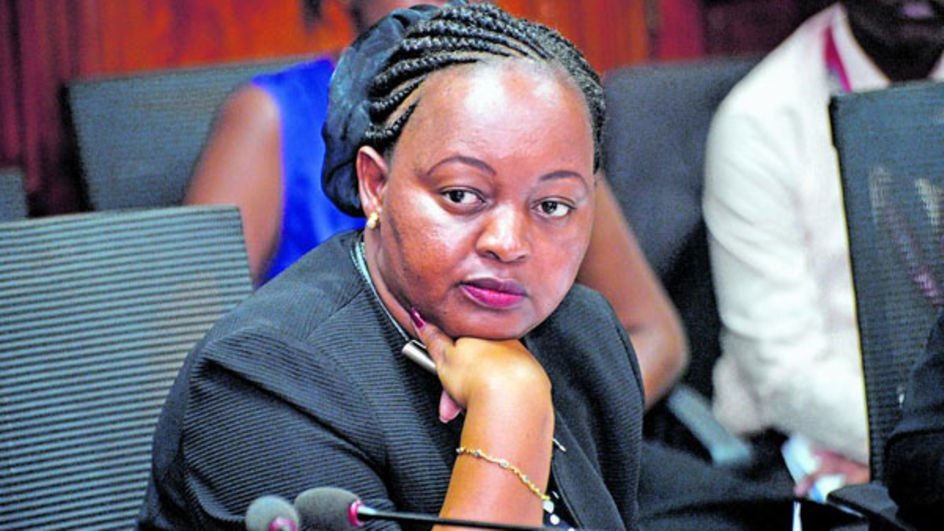 Impeached Kirinyaga Governor Anne Waiguru when she appeared before the Parliamentary Public Investments Committee in 2016 to answer questions on the NYS Scandal: The state-darling has once again fallen under the radar of EACC detectives who seek to unearth some of her administration’s dirt which for long been swept under the carpet…

Ever since her disastrous reign as Devolution Cabinet Secretary was brought to a halt in 2015 over her involvement in the grand National Youth Service (NYS) Sh791 million scandal, Kirinyaga Governor Anne Waiguru’s name has over the past half-decade been synonymous with corruption, fraud, and incompetence.

Her unsurprising transition from the civil service to the highly competitive male-dominated Kenyan politics might have played the infamous role towards getting her off the hook for the alleged crimes orchestrated under her administration, but her journey into local politics has surely been bumpy and turbulent.

Earlier this week, the long-running tug of war between the Kirinyaga boss and her Members of County Assembly (MCAs) took a sharp turn as all gloves finally went off and the much-anticipated motion of her impeachment tabled last month was brought to the floor of the local chamber, fiercely debated, overwhelmingly passed and the resolution forwarded to Senate Speaker Ken Lusaka as per the law.

But even as Waiguru struggles to fight off the latest move by her detractors, a larger storm is slowly brewing at The Ethics and Anti-Corruption Commission (EACC) Central Region Department where detectives are working round the clock to complete an investigation into strong conflict of interest allegations lodged against the county chief in awarding a Sh50 million tender to Velocity Partners Limited, a company reportedly related to Waiguru’s relatives.

The anti-graft agency’s head Charles Rasugu on Thursday informed members of the press that his boys are also keenly looking into claims that the county boss authorized her team’s irregular payment of up to Sh10.6 million travel allowances to some staff just a day after the Kirinyaga County Assembly sent her packing and at the mercy of the Senate.

Special attention has also been drawn into how the governor okayed payment of allowances for fictitious foreign trips.

They have also summoned 25 people to appear before the Nyeri-based investigators for grilling in relation to the Sh10.6 million irregular travel allowance payments.

Thirty-eight (38) other persons who detectives suspect were involved in the payment of Sh50 million to Velocity Partners Limited for undone work are also on the agency’s radar.

“I can confirm that we are investigating the two cases. We have carted away documents from their offices, and I can confidently state that so far, our investigations are going on well. Waiguru will appear before us at the right time. Currently, we are grilling those who authorized the alleged irregular payments before we summon the county chief,” – Charles Rasugu

According to the agency’s regional head, Velocity Partners Limited received payment, yet it did not install a hospital management system, the tender it had questionably acquired.

He added that they are investigating officers from the County Government’s procurement office which has been traced down as the genesis of the alleged misappropriation.

Representatives of up to 19 companies bid for the controversial tender but were never awarded the work.

One of the key things the EACC seeks to establish is the identity of the person who authorized the payment of the undone work.

From the suspects already interrogated, the agency says it is confident it has gathered some crucial information which might soon lead to the prosecution of some of the senior-most officers in the county struggling with power wrangles.

Detectives were drawn to the embezzlement of public funds in the government after the Kirinyaga County MCAs made the allegations against Governor Waiguru during the tabling of her impeachment motion on March 31.

Senate Speaker Kenneth Lusaka on Wednesday confirmed receipt of the motion alongside the grounds for impeachment with a list of 23 county assembly members who voted to impeach Governor Waiguru.

While confirming receipt of the letter, he affirmed the impeachment process in Senate will be fair to both the Kirinyaga County Assembly and the Governor.

The Senate is expected to debate on Waiguru’s ouster within ten days after receiving the resolution from the Speaker of the County Assembly as per Section 14(8) of the Impeachment Procedure Act.

In April, the Governor survived an impeachment motion after Jubilee Party dismissed the Majority Leader who was pushing for her ouster.

Most recently, Ferdinand Waititu’s impeachment by the Kiambu County Assembly was upheld by the Senate.