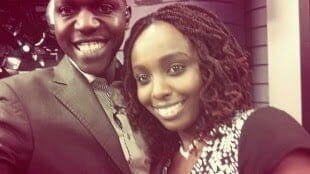 Caption: Plagiarist-In-Chief Njoki Chege with Larry Madowo who this Platform has always condemned for mainstreaming prostitution as if being a prostitute is a revolutionary act.

First of all, we must give the devil his view. Njoki Chege had a remarkable entrance into the media industry; her sporadic articles caught the attention of all and sundry. This was a plus to the ratings of Daily Nation that has always cared about ratings and profits.

Her column, City Girl, registered huge audience. Every week, people looked forward to reading her articles with baited breath waiting to see who was the next on her attack list.

Ironically, in one Paid PR article by Statehouse, she attacked Political bloggers in what can be termed to as high-Level character assassination. Njoki, Who now claims to be under attack, has thrived on attacking personalities.

Delving into the main point, We were later to find out that Njoki Chege had plagiarized an entire article from Harvard Business Review that was done way back in 2012. The plagiarized article appeared on her Daily Nation column- City Girl . The bile filled writer thought she was very smart and would just slide into archives, lift pieces and spin them to look like hers. Unfortunately, the internet never forgets, and sleek Chege was caught in the act. #NMGUnderSiege followed exposing the plagiarism crisis in the media house.

A senior editor and probably one of Njoki Chege’s poker’s Peter Mwaura, wrote a reply in a desperate move to exonerate Copy Paste Chege of plagiarism. Like those programmers you took your computer to fix a little problem and now complicating things with tech jargon, Mwaura embarked on tough words clouding to confuse readers.

You see, shut is shut however much you try packaging it.
Mwaura in his article painted Nyakundi in bad light by loosely hammering his credibility. In his rubbish and unwarranted article, Mwaura summed up everything by saying that Nyakundi owes Chege an apology, and I ask for what?

I was among the Nyakundi Followers who were exposing Njoki Chege the Plagiarist, and I am just giving my views, not hating as media chaps usually say when they are criticized.
In the despicable article, Mwaura ignores to note that NTV YouTube channel was banned a few days ago because of consistent plagiarism. In short, NTV has been using other people’s work without permisiion or crediting .
Plagiarism seems to be an internal policy at NMG and journos like Njoki Chege are there to perfect it. In the academic world, it’s not unusual to borrow works from others, but it’s professional to cite and give credit.
Njoki Chege committed professional sacrilege, and she knows it, stole work of another journalist and used it without giving credits. In conclusion, Nyakundi or anyone who participated on #NMGUNDERSIEGE doesn’t owe Njoki apology. In fact, she should be thankful for the ratings sake, something Nation media group Scumbags Value.

Njoki Chege’s ratings have vroomed off like the blue Subarus. From 100-0 so fast as she watched unable to do anything. Previously, when she released her articles the internet would go abuzz, her name would trend for days but as fate would have it, Kenyans got bored with her stale style of approaching issues, and she finally lost relevance.

We’re it not for Nyakundi campaign on the plagiarism many people would’ve continued imagining Njoki was non-existent. Njokichege should be thankful Nyakundi and his fans picked up her career from the trash bin and put it right back. Be thankful and now shell yourself back. Looking forward to your next copy pasted article, madam.
Bel Akinyi is a political student at Melbourne University and a commentator on social issues impacting Kenya.
Twitter : @ belakinyii