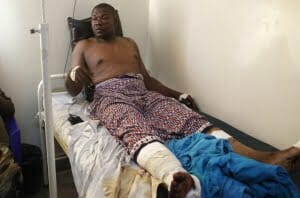 Interior Cabinet Secretary Joseph Nkaissery says security across Mandera, Wajir and Garissa counties have been enhanced and wants teachers camping in Nairobi protesting insecurity to resume duties in their workstations.

Speaking in Mombasa the minister said there have not been any recent security breaches in the Northern counties and wondered why teachers were determined to stay put in Nairobi when other civil servants are already performing their duties in their workstations.

Nkaissery statement came hours before three people were injured in a grenade attack in Mandera on Thursday night.

He said the government has taken steps aimed at addressing security issues in the region and eradication of terrorist threats.

Teachers in the three counties have been camping in Teachers Service Commission and Kenya National Union of Teachers headquarters since schools reopened for the first term.

The security minister has cautioned teachers against giving the government ‘ultimatums and tough conditions’ over return to their workstations.

“As a government we have enhanced security across the country and that teachers should not demand or expect to be given special treatment” he said.

He noted that normal operations have since resumed in Garissa, Wajir and Mandera with other state officers among them administrators and

Nkaissery urged teachers to drop their hard line stance and resume duty forthwith adding that security apparatus were working round the clock to ensure Kenyans are enjoy security and feel protected wherever within the country.