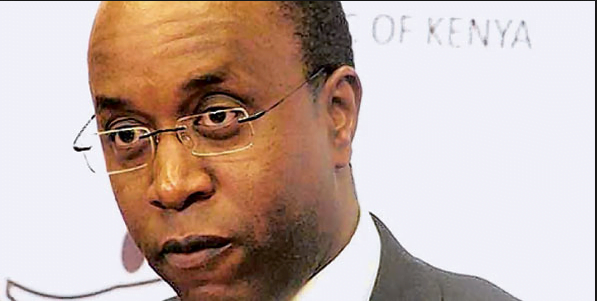 Prominent Uhuru functionary Njee Muturi is suspected of blocking amendments to the Proceeds of Crime and the Anti-Money Laundering Act 2009, that seeks to curtail theft of public funds which are subsequently re-invested in Kenya’s so-called “booming” real-estate sector.

Companies like Knight Frank which specialize in the industry have been generating fake reports about the forecast of the property market, using false statistics but largely refraining from admitting the fact that most of the money invested in Kenya’s real-estate is stole from the public purse.

Notorious for the plunder of public funds and re-investing them into flats and apartments are individuals from Ministries, State Corporations, and new parastatals. Kenya Revenue Authority tops the list of most corrupt officials who own property that’s not commensurate to the salaries they earn.

Other notorious officials include those of new agencies like NTSA, who have also been investing the money they extort from Kenyans into real-estate.

In recommendations contained in Special Report Into Allegations of Fraud at the Youth Enterprise Development Fund (YEDF), members of the Parliament’s Public Investment Committee (PIC) said that there was need to amend Sections 23 and 24 of the POCAMIL Act 2009 to enable the tracking of proceeds of crime, especially to the real estate sector of Kenya.

Parliament noted that there were indications that the real estate sector is used for money-laundering especially through proceeds of corruption. The Attorney General was instructed to submit draft legislation to the National Assembly not later than June 2016 as part of the status of implementation of that specific recommendation.

But there seems to be inertia from the State Law Office with fingers being pointed at powerful Njee Muturi who was recently in the news for tampering with a law meant to help Kenya comply with global anti-doping regulations.

It also emerged that there has been a systematic undermining of the implementation of the POCAMIL Act 2009, whereby the Financial Reporting Center (FRC) and the Asset Recovery Agency (ARA) have been deliberately under-funded by the Treasury and the Office of Controller of Budget. There are said to be powerful forces who manipulate the officers in Treasury to ignore the funding of these critical entities so as to kill the fight against corruption and recovery of stolen funds.

Also on focus is two institutional bodies which are being run by individuals that we have recently mentioned as being corrupt. These are the Directorate of Criminal Investigations (DCI), and the Ethics and Anti-Corruption Commission (EACC).

Ndegwa Muhoro and Halakhe Waqo are the sole focus of the report which cites them as critical anchors in the fight against corruption but seemingly lagging in their roles and duties.

Under the POCAMIL Act 2009, both Waqo and Muhoro have been instructed to institute and conclude cases on Ezekiel Owuor who received 8,7999,450.00 from Mukuria Kamau of Quorandum Ltd., for benefiting from proceeds of crime. Others who received funds from Mukuria include Yogesh Kumar Badwarj, Dilshad S. Mohammed, Doreen Waithera Nganga, Directors of Rock Plant Limited, Directors of Simis Engineering and Construction Company Limited, Mr. Hilary Kiprono Yegon and other directors of M/s. K-Susu Ltd., Gigtych Ltd., with immediate effect.

The Chairman of the Public Investments Committee Adan Keynan tabled the report on 3rd of May 2016 and both Waqo and Muhoro have been ordered to report back in June with clear roadmaps on progress on those cases.