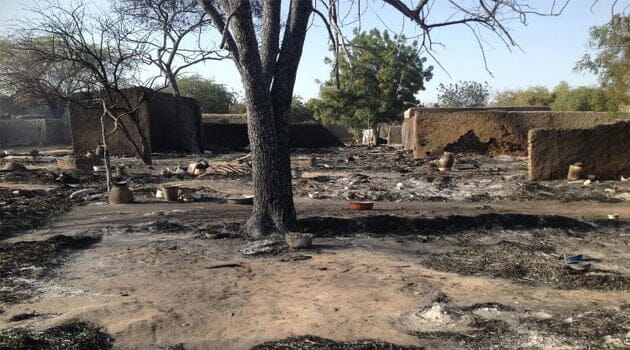 Residents of the northeast Nigerian town of Gamboru returned to their homes for the first time since Chadian forces retook it from Boko Haram, they said Saturday.

Scores of people crossed the 300-metre (yard) bridge that forms the border with Cameroon under military escort to survey the ravaged town and homes looted by the militants.

Boko Haram seized Gamboru in August last year, forcing thousands to flee across the frontier to the town of Fotokol, on the other bank of the river in northern Cameroon.

Chadian forces, who have joined the regional fight to crush the Islamist insurgency, retook Gamboru earlier this month, after intense fighting that left hundreds of insurgents dead.

“We met a ghost town strewn with burnt vehicles, destroyed buildings and emptied homes,” Kachalla Moduye told AFP by telephone from Fotokol after a two-hour tour of the town on Friday.

“Many homes were burnt in the Boko Haram invasion and in the fighting to reclaim it by Chadian soldiers. Those that were spared were looted by Boko Haram in the five months they stayed in the town.”

Gamboru has been repeatedly targeted in the increasingly bitter conflict, which has left more than 13,000 people dead since 2009 and made more than one million homeless.

It was the first town recaptured in the regional fight-back by troops from Nigeria, Niger, Chad and Cameroon, which was launched because of dawning fears of Boko Haram’s threat to regional security.

Gamboru residents who hoped to salvage personal effects were disappointed as they found their homes empty.

“There was nothing in my house save the three wooden beds and my old cushion chairs. Every other item was stolen,” said Fanna Bukar, a mother of three.

“Even my sewing machine, which I so much looked forward to salvaging, was gone.”

But even though their possessions were gone, locals said the tour was reassuring.

“Seeing is believing. We are now convinced our town has been liberated and we hope to come back and rebuild our lives once Boko Haram is finally wiped out,” said Moduye.

“I’m sure we will return soon to start a new life,” added Bukar.