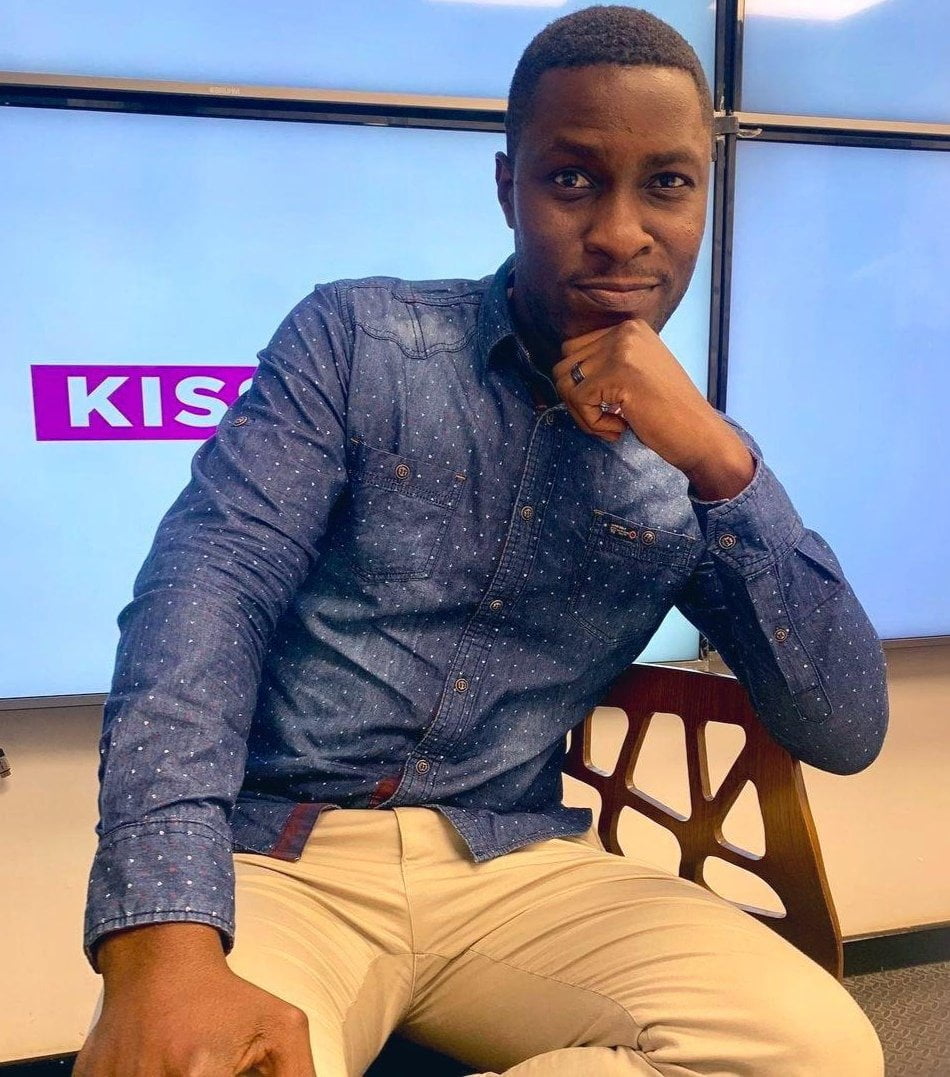 On the same day he announced ending his 9-year stint at Radio Africa Group, media personality Nick Ndeda has been exposed as a deadbeat dad by his baby mama as the two resulted in airing their dirty linen online.

The drama began when Nick, who has been hosting an evening show at Kiss 100 FM, made the announcement of his departure on Thursday through his social media accounts.

“I met the coolest people, made friends, family and memories.

That is what life and its seasons are about.

Thanks to everyone who always tuned in.

Your energy and time was never taken for granted.

So, no sadness, no tears, only excitement because now it means we are about to start a new experience, make new friends, family and memories onwards,’’ he wrote in a farewell message.

Responding to one of the replies to his post from fellow presenter Gmoney, Nick jokingly said that throughout his life, his mother always said he was “special”.

Shortly after, a woman claiming to be his baby mama popped up in the comments, angrily clapping back at Nick’s post with accusations that he has been denying his 6-year-old daughter’s existence ever since she was born.

“She should tell you to take care of your kid… does she know that you make videos denying her existence 6 years down the road? Fucking hell,” she tweeted. 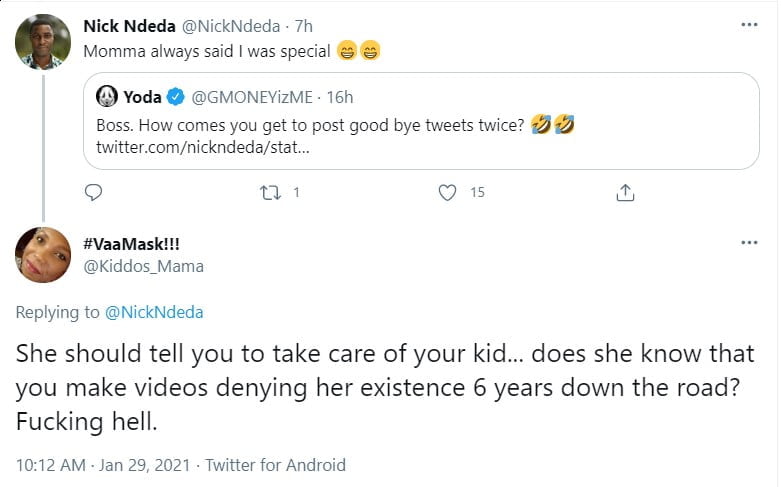 Minutes later, the woman who only identifies herself as “Kiddo’s Mama” on all her socials, wrote another tweet in reply to a YouTube video of Nick Ndenda and his presumed current lover Muthoni Gitau in which they speak about “choosing to be childfree”.

“Today’s video will be touching on our choice to be childfree and how that has been. I’ve always known I was not going to have children from a very young age. When I first said it, those around me assumed I would change my mind at some point. Last year, I turned 30 and now it seems like people are hellbent on making sure I have a child or explain why I won’t. The interesting bit is that most of these questions are by strangers, people with no stake in my life. Nick and I sat down and shared our story and we hope you will enjoy it,” reads the video’s caption written by Muthoni Gitau.

But according to the fiery baby mama, everything Nick says in the video is all but a huge lie.

“I don’t know why nick keeps lying about children. About time you told him being a deadbeat is abusive… also, tell him the videos are unnecessary. They won’t change the fact that she’s 6 and growing,” she wrote, finishing off with a message to Muthoni Gitau that not even the YouTube videos can erase “Kiddo”.

“Muthoni, you and your roho chafu know that Kiddo is older than your relationship. Respect her,” she added. 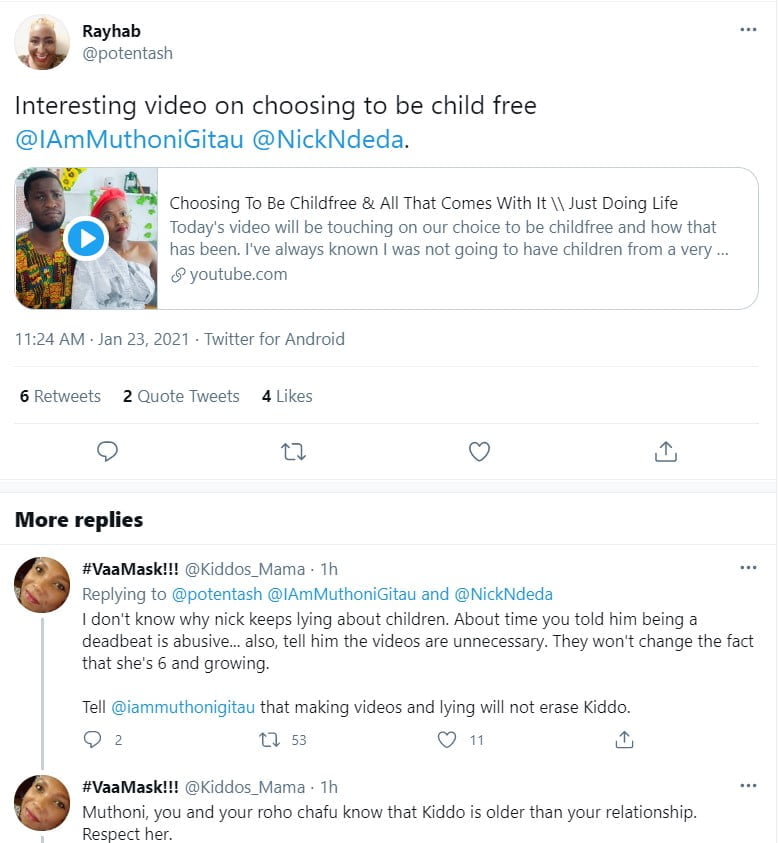 Moments after, she unleashed another tweet, this time warning her followers against believing “in people doing things for likes”.

“They will literally say anything. Including saying they will adopt kids kumbe hata ule wake hata maziwa ndogo hajawahi mnunulia,” she tweeted.

From her Twitter account created in 2012, it’s hard to tell who exactly this mystery baby mama is.

But as far as the legitimacy of the claims is concerned, the only thing quite clear from her blog linked to the Twitter account is that she is indeed the mother of a six-year-old girl whose pictures are spread all over the website. 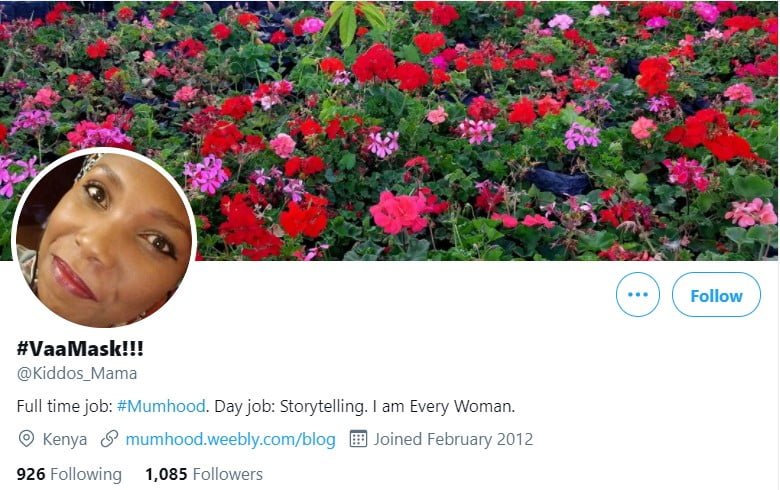 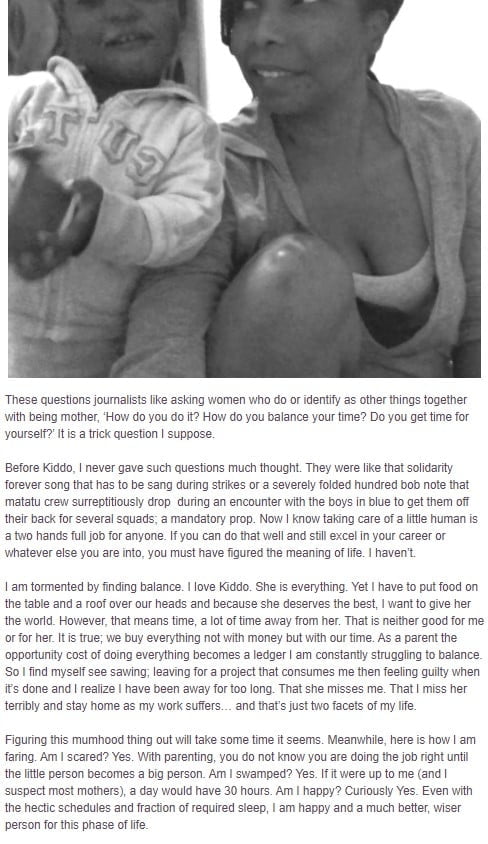 CAPTION: One of the posts on Ndeda’s baby mama’s blog

Prior to his two-year stint at Kiss FM, Ndeda worked at X FM for seven years which is also owned by the Radio Africa group.

Away from the microphone, Nick is an actor and has played different roles in over 50 different plays.

He has played lead roles in MTV series Shuga, Higher Learning which played on NTV and the acclaimed show 18 Hours.