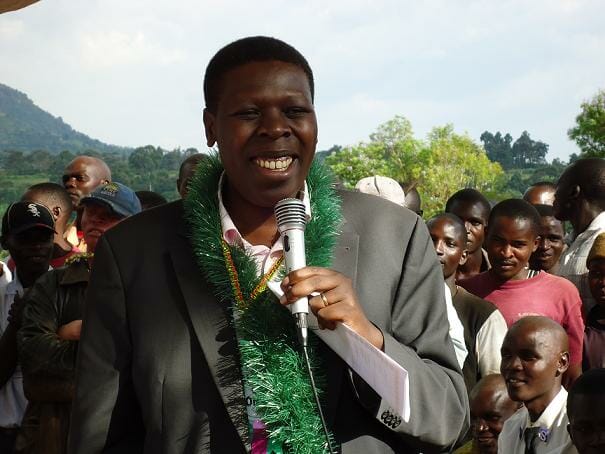 Even as anxiety builds up on cabinet secretary for Water and Irrigation Eugene Wamalwa, questions are being asked on his political fate in his home region’s politics. Wamalwa who told parliamentary vetting committee that he has shelved his presidential ambition for 2017 has been throwing lethal salvos to the opposition.
Wamalwa who had in recent past assumed low profile in politics and matters of national interest opened fire on his political nemesis Bonnie Khalwale for what he alleged were derogatory statements to undermine other leaders in the region.
He cautioned the noisy Kakamega senator over his recent utterance during Uhuru Kenyatta’s visit in Mumias that the region had only two notable leaders, Moses Wetang’ula and himself.
“You are my brother Khalwale but I must say this. We can only achieve this unity of purpose if leaders respect each other. There must be mutual respect among leaders. You cannot say that Khalwale and Wetang’ula are the only leaders in this region, What of Musalia Mudavadi, the 42 MPs, governors and senators from the region? Every one is a leader in his own right,’’ said the irate Wamalwa raising adrenaline of the mourners in the Mukhisa Kituyi’s son’s funeral.
And in what seemed to be a full exploitation of window period to politick before being sworn in as a cabinet secretary, the hardly ever combative Wamalwa further took to task the opposition brigade present in the funeral in a head-on confrontation, heightening political temperatures in the region.
Wamalwa said he will not run for the top seat but predicted a two-horse race between Raila Odinga and Uhuru Kenyatta. “Farasi ni wawili na wembe ni ule ule,’’ said Wamalwa.
He said that he has not chickened out of politics but just retreated to strategise ahead of polls.
“In war, you retreat to advance and retreating is not surrendering,” Wamalwa said. The terse statement was made in the midst of other presidential hopefuls – ANC party leader Musalia Mudavadi and Peter Kenneth who had attended the funeral alongside Wetang’ula of Ford Kenya.
Kenneth avoided politics as Mudavadi maintained a stand on regional unison. His statement came at the backdrop of Wetang’ula’s assertion that he is not escorting the Cord leader but charting his political destiny ahead of 2017 polls. Wetang’ula said he is not playing second fiddle to Raila but that he will race for president in the 2017 election.

“Even as you see me in Cord, I am not escorting anybody. I am walking my journey,’’ said Wetang’ula. He read mischief with activities of the Western parliamentary caucus that dragged president Uhuru to the aid the ailing Mumias Sugar Company.
“I know our MPs are united but they should not allow other exterior forces to decide their destiny. We have walked that path before. The caucus should include all the five governors and senators from the region for it to have a significant economic impact, failure to do that mjue mnapangwa (schemed upon),” said Wetang’ula. Wamalwa asked the leaders to put politics aside and concentrate on development. “What we saw in Mumias is a paradigm shift in the politics of the region. What we’ve been experiencing in the past is power politics where we concentrated on who is more powerful than the other. Is it Ford Kenya or New Ford Kenya? This mentality will not help our people,” said Wamalwa after reading Uhuru’s message of condolences to Kituyi’s family.
“Let us unite and focus on development for our people and politics will be played later on.”
Keen political observers have been keen to note that the elevation of Wamalwa to the Water docket could rebuild rivalry between him and Wetangula in a battle for the region’s votes.
Wamalwa who is seen as Uhuru’s key pointman in the region is slated to face Wetangula who is holding brief for opposition side.
Wamalwa also seems to have abandoned former Amani coalition boss Mudavadi in his political matrix to chart his destiny after he stepped down for him in 2013 polls. Wamalwa will be relying on the youthful MPs in the region to deliver the Western vote bloc to Jubilee in the next polls as they restrategise for 2022 polls.
Former Lugari MP Cyrus Jirongo who heads a new outfit in the region, is of the opinion that the youthful MPs are being used by Jubilee government to spoil the regional political script.
“What they are doing is reading the foreign script. We must draft our script,’’ says Jirongo who heads UDP alongside former speaker Kenneth Marende. Pundits have argued that the seclusion of presidential hopefuls in the Western parliamentary caucus is a clear indication that the outfit is secretly pulling the carpet from under the old guards.