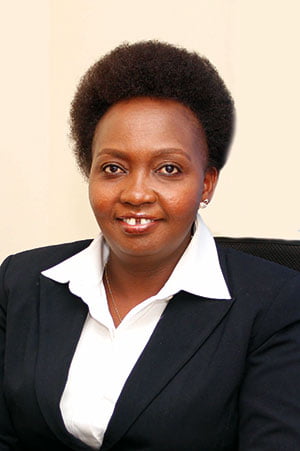 Hannah Muriithi, Chairperson to the corrupt NHIF Board

The two were later suspended and put on compulsory leave.

The Kikuyu Mafia had won and they now had a person who was to be their puppet in the whole scheme. A man whom they could let go without much thought. See, Odongo is a Luo as opposed to the Mwangi that comes from their tribe. Mwangi had hurt them because he was looting and sharing most of the proceeds of crime with DP William Ruto.

Now, they had a man who could even protect them from scrutiny because, see. ‘ a kikuyu-thieving board had appointed a Luo’

That same November, Auditors sent by the Ministry of Health that had gone to investigate allegations of corruption at NHIF were threatened with ‘fire’.

This, according to insiders at the ministry, stalled planned restructuring to enhance efficiency at the fund.

The CEO and the Finance Director paid the ultimate price, became the sacrificial lamb, yet the hoard that had overseen and sided with their corrupt decisions stayed on in Office.

The DPP and DCI claimed that Mr. Mwangi and Mr Kuragat denied them crucial documents in the investigations over a fraudulent purchase of a Ksh93 million parcel of land.

The other raid that was so crucial in ending the graft-train at NHIF, one which has been hushed by the Githeri media was the raid that took place in the houses of other top managers at NHIF, especially, that ine that targeted Chairperson to the Baord Ms. Hannah Muriirhi.

The DCI detectives were denied entry to Hannah’s house and later recalled.

Why was Hannah Muriithi spared even through she has been the chairperson to the board which oversaw and continues to oversee the looting of the national insurer.

It is public knowledge that between 26 and 27 September, the investigation team, led by Chief Inspector of Police Marubu, conducted searches at the offices and private residences of senior officers at NHIF head office wherein several documents were recovered by the investigators.

Why was Hannah’s house bypassed in the raid?

What crucial documents in the scandals at NHIF was she keeping in her house? who called off the search of her house?

Ladies and gentlemen of Kenya, we have started unraveling the real faces behind the looting of NHIF.

Ms. Hannah Muriithi, the Chairperson to the board, appointed by the equally corrupt Cabinet Secretary foe Health Sicily Kariuki, is at the center of our expose.

The board at NHIF must be disbanded and a new one appointed. How could they stay on when the CEO and Finance Director were fired yet they were in tandem in looting our money?

If you are working at NHIF and are tired of the looting going on there, send information to [email protected] or WhatsAPP 0710 280 973