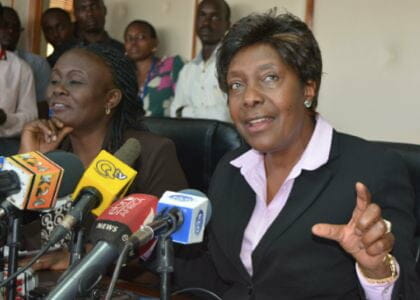 Encroachers on a university land in Nairobi’s Upper Hill area have been given two weeks to vacate the area or be forcibly evicted. Lands Cabinet secretary Charity Ngilu yesterday led ministry officials to the contested 1.6 hectares of land on Chyulu Road off Ngong Road and gave marching orders to the traders.
The CS said the land which is opposite Nairobi Sports Club and next to Meladen hotel is legally owned by the South Eastern Kenya University and the traders illegally encroached on the piece of land. She dismissed as null and void the traders “ownership documents” which she said did not originate from the ministry.
Ngilu said the land according to Land ministry’s records was registered under Ukambani Agricultural Institute which was later upgraded to South Eastern Kenya University.
University Vice-Chancellor Geoffrey Muluvi lauded the move by the Lands ministry saying the university had petitioned the ministry in the past with little success. In the past month, the ministry has been tough on grabbers of public land especially in Nairobi where many structures have been demolished by the ministry. Schools, road reserves and water projects have been the major casualties of the land grabbing in the country.