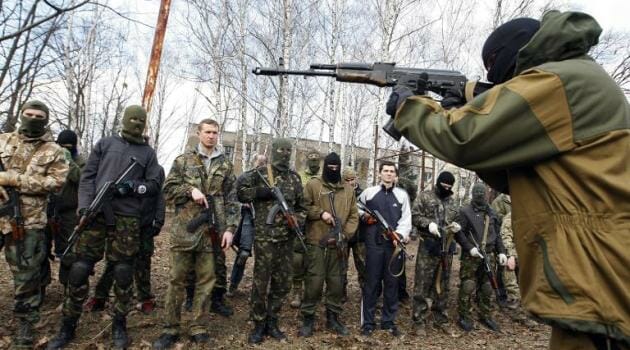 Ukraine’s frontlines were relatively calm ahead of high level EU mediated gas talks between Kiev and Moscow, as journalists mourned the killing by mortar fire of a Ukrainian photographer.

Kiev’s security officials said there was no fire after midnight on Ukraine’s positions and no Ukrainian soldiers had been killed over the past 24 hours.

Security spokesman Andriy Lysenko, however, said that eight soldiers were injured after rebels shot at Kiev’s positions late Saturday, including from a tank and a grenade launcher.

The relative quiet in eastern Ukraine has set in following a shaky start a European brokered peace plan to end fighting that has killed at least 5,800 people since last April.

Both sides had begun to pull back some heavy weaponry from the frontline, with rebels claiming Sunday that they will complete the pullback by the end of the weekend.

Monitors from the Organization for Security and Cooperation in Europe (OSCE) have reported weapons movements on both sides but say it is too early to confirm a full pull back.

Speaking at the UN Security Council Friday, the OSCE’s envoy to Ukraine Heidi Tagliavini said the current situation was at a “crossroads” where the risk of further escalation remained high despite “encouraging signs.”

US Secretary of State John Kerry arrived in Switzerland late Sunday for what looked set to be tense discussions with Russian Foreign Minister Sergei Lavrov over Ukraine, with efforts to implement a tattered ceasefire topping the agenda for the Monday morning talks.

Despite a fall in the number of violations of a truce implemented on February 15 between Russia, Ukraine and the pro Moscow rebels in the eastern part of the country, it was “too soon to tell if we are in any way out of the woods,” a State Department official travelling with Kerry told reporters.

“At this point a further pullback of heavy weapons is what’s required. There are continued violations of the agreement that we’ve also noted.”