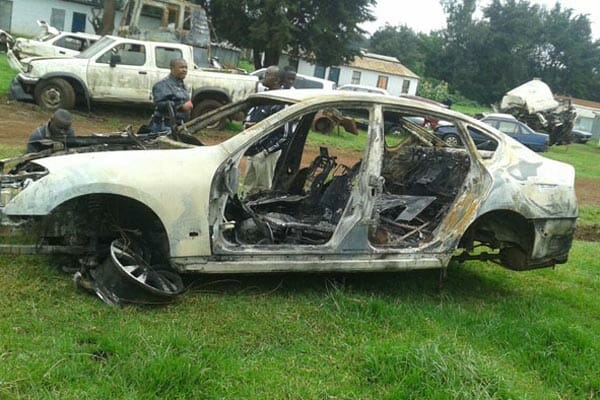 Two directors of the troubled Kihiu Mwiri, a land-buying company in Muranga South, have been shot dead.

This brings the number of murdered officials in less than two years to eight. Four other officials are missing.

Mr Chrispas Wanyoike and Mr Chege Mwangi were murdered Wednesday at 7.30 am on the Kihiu Mwiri-Kabati road.

The two, according to the area assistant deputy county commissioner Mr Joel Cherop, were riding on one motorcycle heading to Kabati Trading Centre when they were shot dead by a gang, also on a motorcycle.

“When they got near P.K. Primary School, the other people tried to overtake them and the person who was on the passenger’s seat sprayed bullets at them, killing them on the spot,” Mr Cherop said.

Mr Cherop said investigations were already under way but they suspect that the killings could be related to the ongoing leadership wrangles pitting different factions against each other over the company’s leadership.

Police are also still investigating the mysterious disappearance of the company’s chairman, Mr Paul Kariuki, who was abducted shortly after leaving the company’s offices early this month.

Police officers on patrol in Limuru found his car a day later near St Paul’s University. It was burnt beyond recognition.

Three days before Mr Kariuki’s abduction, Mr Paul Kaharu, a director at the same company, was shot dead as he was getting into his car at Majengo Estate in Thika.

He had stopped to meet a friend while on his way home when the assailants, who were on a boda boda, shot at him six times.

Other directors who have also been shot dead since last year are Mr Peter Kuria, the company’s vice-chairman, who was shot dead at his Grey Stone area home on May 10; Mr Wilfred Gichana, who was killed in January this year; Mr Charles Kamau, a director, who was accosted by a gang at his home; and Mr Ibrahim Mwangi, who was killed by a gang that forced its way into his home at the Kihiu Mwiri farm.

Mr Benson Ngubi was killed in 2001 after he was accosted by a gang in a coffee plantation while on his way to a company meeting.

Three directors — Newton Muhoro, Job Mwangi and James Kimaru — were picked up from a Thika hotel in March last year by people who purported to be police officers and their whereabouts remains a mystery.

Police in Kiambu and Murang’a have been puzzled by the killings but believe leadership wrangles at the company were to blame for the gangland-style killings and disappearance.

Mr James Mugera, the Kiambu County police commander, said their preliminary investigations have linked the killings to the leadership wrangles pitting factions at the company against each other.

“It’s only the directors who are being targeted and it’s clear the killings are related to the company’s leadership. There is a history of two parallel groups of people claiming to be the authenticated officials,” Mr Mugera said in recent interview.

Mr Stephen Chacha, who is in charge of criminal investigations in Murang’a County, said the fight among the directors to control money was entirely to blame.

Mr Chacha said there is no remaining land to grab or sell but those in office have been collecting fees from members of the company claiming to process title deeds and other related activities.