The DPP this morning ordered for the arrest of the Ministry of Agriculture, Livestock and Fisheries PS Dr. Richard Lesiyampe over irregularities in the purchase of maize By NCPB officials.

Dr Lesiyampe is to be arrested alongside Newton Terer, Cornel Kiprotich, Caroline Kipchoge, Renson Kibet, Eric Kipketer and Joseph Kipruto. All who are predominantly from the same ethnic group. 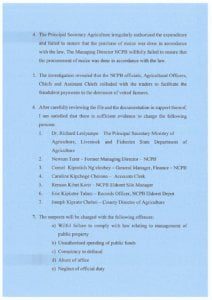 Caption: Official statement from the DPP over the arrests made today.

Immediately the news broke online Kenyans didn’t waste time to air their displeasure over the community’s dominance in the board. Some holding strong views that this was yet another case of nepotism and tribalism in many of the government’s ministries.

This is how Kenyans reacted.

We must have ethnic balance in civil service. You see now the arrest of officials in this ministry looks like arrest of only Kalenjins. Because from top to bottom, we have a single ethnic group in the ministry. This is SAD!!! pic.twitter.com/WpweRcPZV6

If the DPP goes for all the directors of NCPB, he might end up arresting all the Kalenjins. This board is more or less like one of those that operates from Uasin Gishu. Never seen a tribalised board like this.

So it's official only Kalenjins who work at NCPP
Tribalism is what kills our nation
Uhuru-Ruto the biggest tribalistic people pic.twitter.com/h0nn4e99cV

All the big shots in NCPB are from one community #Kalenjins lmfao . what is NCIC again, oh ya .. its led by one kalenjin #OleKaparo . ok DPP Noordin Haji

Kwani it's only the Kalenjins who work for the NCPB?

Imagine if Ruto becomes president and the composition of NCPB is as it is currently.

What will happen when he his fully in charge?