There is a barrage of delusional JAP-supporters, whom we try to convince that Uhuru isn’t one of them, being a kid who attended the “prestigious” St. Mary’s School, mingling with white children and assimilated into their culture by the Irish Priest who was conducting a social-experiment on integrating black kids from rich backgrounds with white kids from the post-colonial establishment.

The Irish Priest who many a St. Mary’s alumni refer to fondly and remember their days with nostalgia, simply wanted to institutionalise colonialism, by conditioning the likes of Uhuru and children of the black elite/emerging African leadership, that whites are essentially more superior than blacks. It’s the reason why all of Uhuru’s companies are ran by whites.

Jubilee sycophants, many who are perennially broke and are always walking around pubs begging for free drinks, will be sad to finally see the reality that Uhuru isn’t one of them. He is simply a rich-brat, who has no interest for the ordinary mwananchi.

Eric Kogi, Jane Kogi, Polycarp Hinga, and other perenially-broke Jubilee sycophants who live on “hope” that one day God will reward them for their steadfast love and adoration for Uhuru, will be disheartened to see how their fellow black children were treated at Statehouse, compared to black students.

In Uhuru’s ideal world, Kenya should only consist of children that attended British-system curriculum schools, speaking in deep fake accents and are both heavy drinkers and smokers.

Today, it’s very sad to hear that even the Jubilee MP’s who need favours from Government, access them via Deputy President William Ruto and not Uhuru Kenyatta. It is perhaps in this structure that misled the DP to commence early 2022 campaigns, because all Central MP’s engage him more than they do with their own person who is in StateHouse.

The truth is that DP Ruto is in-touch with the mwananchi and Uhuru is in cloud-9, with his fellow mzungu’s. Neo-colonialism at its best! 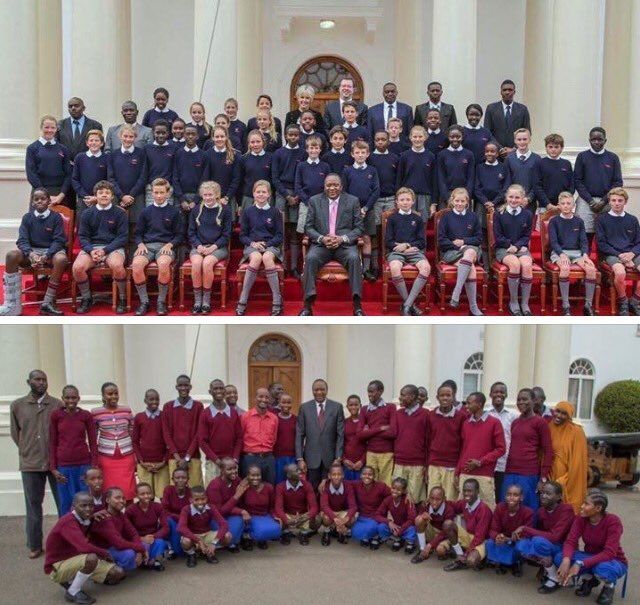 CAPTION: Two photos, one President. Be the judge!