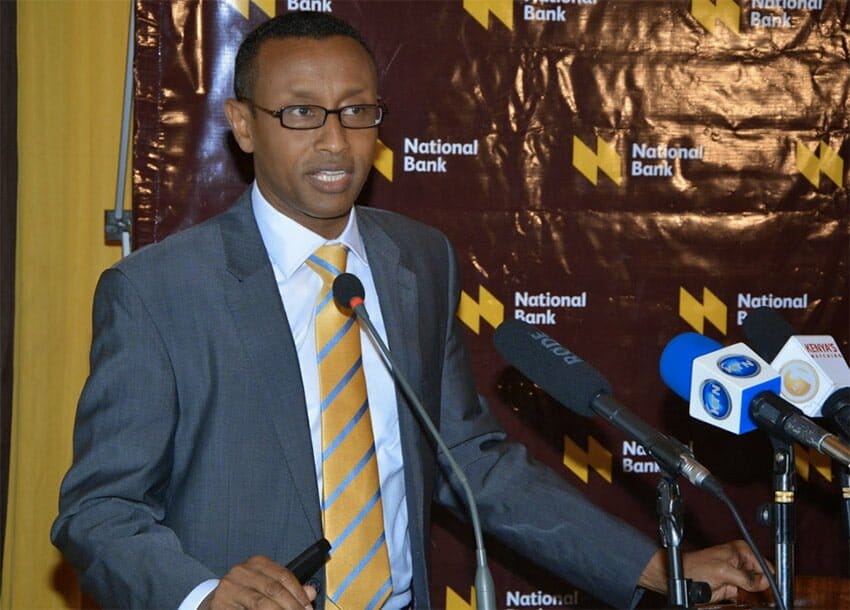 Apparently the cartel that is supporting the former CEO Munir Sheikh was behind the hiring of current (acting) CEO Musau in-order to advance their interests.

This said guys are still thriving. Munir’s company is still being paid rent for the godowns in Mombasa Road by National Bank of Kenya (NBK).

Those buildings used to be the property of National Bank until he sold them off to himself and flouted all procurement regulations in the book.

It’s also wise to note that Munir Sheikh after stealing from the bank and awarding himself millions of dollars worth of contracts will be eligible for his resignation-benefits. How can a man who has looted so much, still be entitled to benefits?

Senior managers Thomas, Cromwell, Rahab and Musau are down-rating employee’s so that they can award themselves hefty salary increments on a bank that’s almost on its death-bed.

It’s also prudent to note that NBK’s unionisable-employees have taken the management to court over this.

Mohammed Hassan the NBK Chairman who learnt the art of corporate fraud from Jimnah Mbaru, is using Musau as a stooge to advance his interests.

Mohammed Hassan the Dyer and Blair crook, is seeking re-election as the Chairman of National Bank again during next week’s Annual General Meeting (AGM). It’s a travesty that even after looting money from the bank’s coffers to start his own Hass Petroleum Company, that this fellow still has the guys to request for an extension of his tenure.

You will all remember that Mohammed Hassan together with CFC-Stanbic Bank conspired to withold a client’s money and opted to trade with it illegally. He has bribed Capital Markets Authority officials like Francis Muthaura’s son, so as to turn a blind eye on that glaring element that touches on integrity, something that’s lacking today in Kenyan Corporates.

Sandra the Director of Chinese business is also involved in alot of money laundering. She brought accounts that were laundering money. Do you remember the deported Taiwanese hackers who were extradited to China? She is the one who introduced them to the bank.

Thomas Gachie the Director of Operations who crooked Asians use to advance their theft, is still in office and is a corrupt individual.

The AGM should question what each director has achieved personally in the period they have been in office. They shouldn’t be surprised to discover massive irregularities and fraud are the only hallmarks of the current senior managers.

Gwen the Senior Manager, Bank Assurance never came to work throughout her entire pregnancy plus an extra six-months yet her salary was paid out in full.

And yet the bank down-rates other productive and hardworking employees. It’s a sham of a mockery.

NBK is known to reward women who concede sex with positions and salary increments. Notable is how Rahab Ronoh slept her way to the top with Munir Sheikh which guaranteed her a Kshs. 850,000.00 net salary.

Casuals and interns in NBK sleep with bosses so that they can be awarded permanent jobs, especially those attached to the Credit Risk Department. Notable is the just concluded team building trip where a lot is said to have happened.

Miraculously, all the casuals and interns were absorbed as permanent staff immediately after the team building trip.

Job favoritism is rampant in NBK. Notable is the ICT department where Raphael limo (head of digital channels), colludes to award alot of incompetent people hefty pay increments, for instance one Kitur who is said to watch DVD series on his computer from morning till evening.

His work computer is filled with torrents for movie downloads. No wonder staff-exodus in the ICT Department is very high. NBK has lost talent when the said people exercise tribalism and negate merit.

Asians collude with management to award contracts for a cut. The ICT team’s rush to sign off sub standards projects made the bank loose alot of money via these dubious projects.