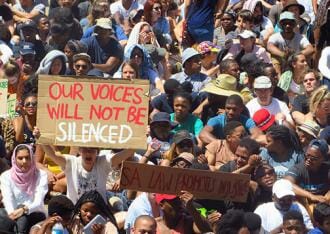 We saw a horrible instance where Deputy President William Ruto attempted to grab a children’s playground in Langata. We have seen 8-4-4 systematic killing of co-curricular activities, choosing to lay more emphasis to cramming of redundant subjects.

The domino-effect of this utter contempt of young people by a dysfunctional system created by a retarded former President Moi, is moral decadence, where youth utilise their free time not engaging and interacting in positivity, but exploring their sexual curiosity.

We have seen both National and County Government’s not prioritising arts and sports, with Governors preferring to take their side-chics on holidays to Dubai. Others like Kirinyaga Governor Joseph Ndathi is using county funds to promote a Nairobi women’s representative candidate, instead of upgrading sports grounds or building art theatres.

This contempt towards young people by the old bastards who have ruined this economy has to come to an end, because we are witnessing a collapse of the system Moi put in place.

From the Gertrudes Children’s Hospital scandal, we have come to discover that students cheated their way to pass exams and get admitted to medical school, and are thus quacks masquerading as doctors. The system is indeed breaking.

This clip is not meant to ridicule anyone, but should be an eye-opener of the destructive nature of youths that are not occupied.

Shame of those characters of Ruto’s ilk, whose corrupt practices continues to deprive young individuals of opportunity.

Secondly, it’s insane how much attention is paid to the chattering classes aka civil society – this being from 2011 and they’re still going on and on about corruption being worse than ever before.

Since they are having zero effect they should step aside as clearly they have become essential to the status quo with their ineffectual self-serving existence being obviously anti-Kenyan.

Step-aside civil society. We are tired of your fruitless rants. Time for a paradigm-shift.