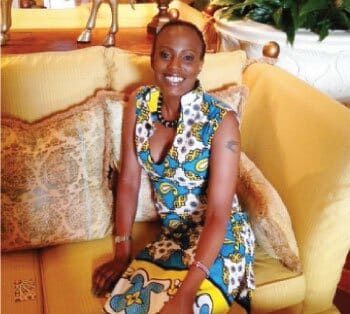 First and foremost is to acquaint you with the two individuals listed above. Nana Gecaga is sister to Jomo Gecaga, currently Uhuru’s Private Secretary who made news as the buffoon that took a selfie with President Obama’s “Beast” outside the precincts of StateHouse. Nana had hit the news a while back after hiring a white nanny from England, whom she was paying a salary as equivalent to a Kenyan MPig. Logically she is from the TNA side of the Jubilee coalition and a relative of the President Uhuru Kenyatta who is her uncle.

Steven “K1” Kariuki is the son of Bishop Margaret Wanjiru, and an offspring of the late Jimmy Kamangu. K1 is the Area MPig of Mathare Constituency and was elected on an ODM ticket. The mother is a diehard Raila supporter, or so we hear.

Nana and K1 recently got together and married, and now have two kids. The ODM MPig is a mainstay in Statehouse and is a beneficiary of deals cut through patronage of the President. Nana herself cut many deals while doing mediocre marketing campaigns together with Phyllis Kandie for Brand Kenya, campaigns that have not yielded anything, seeing as our tourism industry is on its death-bed. Yet at some point, both will be “fighting” each other in the mainstream media, purporting to front different political ideologies.

The late Fidel Odinga’s best friend was Joe Nyagah. Many of you will remember Junior Raila asking friends to liaise with Joe during the funeral. Joe is married to Dr. Gikonyo’s daughter. At some point in the next elections, both will be seated in a bar, purporting to front different ideological agenda’s.

Meet Junior Odinga. He once had an accident while speed-chasing down Valley Road with his best friend, and son of former CID Director John Kamau, who has married Uhuru’s niece and daughter to Kristina Pratt, and who now works as an aide to the Head of State. At some point, these spoilt brats will be somewhere, purporting to represent different ideological beliefs.

Meet Udi Gecaga and father of Jomo and Nana Gecaga. Married Dr. Sally Kosgei in London when Sally was the Aldai MP, elected under the Orange Coalition. Udi is an uncle of Uhuru while Sally Kosgei is Raila’s top advisor and campaign contributor. Ofcourse at some point, they will convince us that they are in different parties.

Meet Moses Wetangula. When he served as Foreign Affairs Minister, his first Personal Assistant was Jomo Gecaga, and both know what happened to the money that was stolen in the Tokyo Embassy heist, even though we all know that Wetangula used his share to build flats in Syokimau. IEBC has been encountering huge stumbling blocks in their bid to strike Wetangula off the voters roll, but I guess now everyone can connect the dots. At some point, both these individuals will present different political ideologies for the public to digest.

And many other examples which we leave you to figure out, because our work is to open your eyes to the reality.