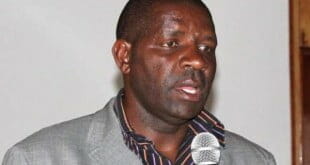 Chaos is expected at Nakuru Environmental Court during the hearing of a case where a Nakuru MP has been sued.
Nakuru Town East MP David Gikaria not to take plea before the court.
Gikaria has further been quoted saying that he will not honour any of the court’s summonses over the alleged accusations that he had dumped hazardous waste at a public place.
The MP termed the court as “illegal and unconstitutional” arguing it has no legal mandate to summon him.
The lawmaker was arraigned in a Nakuru court recently for dumping crushed bottles and boxes of liquor on undesignated public land.
He has since dismissed the hearing set for September 19, claiming there will be no justice at the court situated at the county headquarters arguing that its location is not a gazetted area.
After appearing before it, Gikaria further accused Nakuru county governor Kinuthia Mbugua of using it to suppress critics.
The MP was charged of allegedly leading members of the public in disposing the waste on two round-abouts along Geoffrey Kamau Highway between July 11 and 16 this year.
The waste was collected from factories, depots and shops raided in a crackdown on illict brews that have been christened second generation alcoholic stores.
The National Environment Management Authority sued Gikaria for dumping the waste on the road.
When he was brought to the court to take a plea on the charges, the MP’s lawyer Ochang Ajigo said his client could not take plea arguing that the charge sheet was defective.
“The charge sheet is signed by one Margaret and its letter head is from the Nakuru county government. Nema has not been devolved to the counties so that the county can have the jurisdiction to charge people,” said Ajigo.
He argued that the use of a document signed by a county government staffer was discriminatory and infringed upon his client’s rights.
Prosecutor Moses Mburu said the charge sheet was stamped and signed by the public prosecution.
Mburu before senior resident magistrate, Judicaster Nthuku, continued to argue that Gikaria was a “bad example” to residents adding that the charges could not be contested at that stage.
The magistrate released Gikaria on a cash bail of Sh200,000 with an alternative bond of Sh300,000.
The chaos speculations are rife in the Nakuru county headquarters especially when going by other MPs’ stand on the Gikaria suit before the court.
Recently, at his Nakuru county’s Bahati constituency, legislator Kimani Ngunjiri disclosed that they will march to the Environmental Court during Gikaria’s trial.
“I have started asking for other leaders’ support on this initiative and Nakuru residents should know that it was not only Gikaria who participated in the liquor destruction but all the Nakuru county MPs except one,” added Ngunjiri during a public function at his home constituency.