Nakuru Town East MP David Gikaria has been arrested for organising Monday chaos which saw matatu operators clash with police officers for kicking them out of the CBD.

Matatu owners complained that the three termini where they were redistributed are in deplorable in condition as they demand to be allowed back into the central business district.

Rift Valley Regional Commissioner George Natembeya confirmed the arrest of Gikaria who is now being held at the Nakuru Central Police Station.

Natembeya also confirmed that the controversial lawmaker’s arrest was  linked to the chaos.

Rowdy operators were met by armed police officers who shot in the air and  lobbed tear gas canisters but they managed to pelt the officers with stones bringing business in Nakuru to a halt. 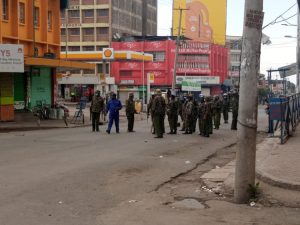 This is the third time the lawmaker is secretly pushing the operators to resist the move to lock them out of the CBD.

“The County Government of Nakuru has good intentions whose full implementation will lead to an expanded modern and vibrant town,” read part of the statement.

Kinyanjui further claimed that Nakuru is procuring a contractor to start the building of a modern transport centre with all amenities.

“We are aware of plans by a section of public transport operators to demonstrate in Nakuru town over the relocation of stages outside the CBD,” he said.

The operators were kicked out of town in efforts to decongest the CBD when covid-19 broke out in March.