The Editor of a tabloid operated by Standard Media Group “Nairobian” by the name of Charles Otieno recently had a meeting at Njenga Karume Family-owned Jacaranda Hotel, Westland’s and was given a hefty bribe by family members to start a cleansing campaign. The family has also bribed the presiding judge in the Kiambu law courts who “ordered” that Karume’s grandson be committed at the luxury of a hospital and not jail. 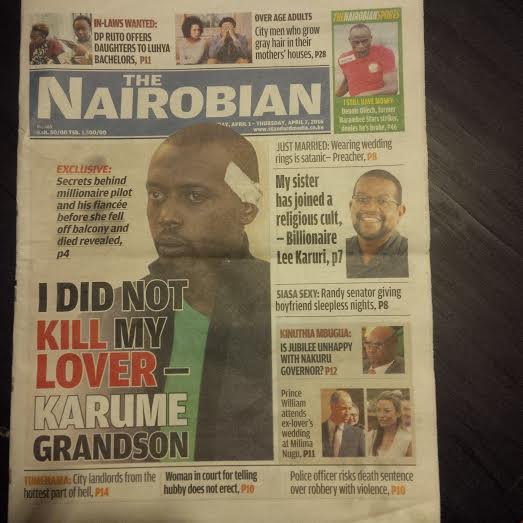 Caption : The article that was done by Nairobian Tabloid to cleanse the Njenga Karume Family after son Murdered his wife

As that was happening, neighbours at the Gracia Apartments in Kiambu received a letter from the landlord, exonerating their spoilt son off murder, and lying that the his girlfriend threw herself and committed suicide, yet they heard a commotion and even members of the public saw him scaling walls and running away from the police. If he was innocent, why was he evading police arrest? Why did members of the public want to lynch him? Why is there a lady in Doha, Qatar claiming to be his ex-girlfriend and confirming that he is a killer? 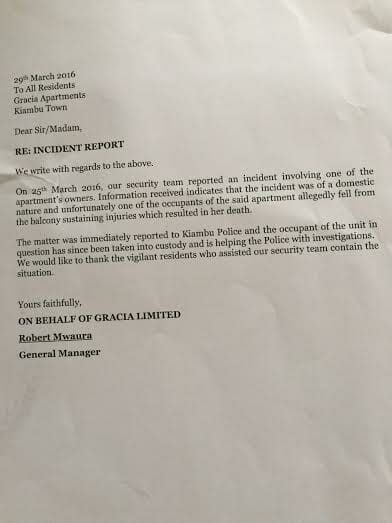 Caption; The Letter neighbours at the Gracia Apartments in Mombasa received from the landlord, exonerating Karume’s son from Murder

Already this is gross interference with witnesses, a matter that should force the Director of Public Prosecution to call for the arrest and jailing of anyone interfering with this police investigation, beginning with all members of the Njenga Karume Family. Why do they think they are above the law?

Secondly, it is contempt of court for media houses to pre-empt the outcome of any case or even discuss it’s nature before the matter has been ruled and determined. What Standard Group did was blatant manipulation of the court process, giving one side of the case undue advantage. We now call for the arrest of Standard Group CEO Sam Shollei for allowing his tabloid to interfere with an on-going case.

We ask the Director of Public Prosecution and the Chief Justice to be forthright and set precedence. Change the judge handling the matter as he has already been compromised. Call for the arrest of members of Njenga Karume’s family who are interfering with witnesses.

We also petition the Independent Police Oversight Authority to immediately to launch investigations into Kiambu County Police boss who has been receiving money from the Karume family to manipulate the investigations.