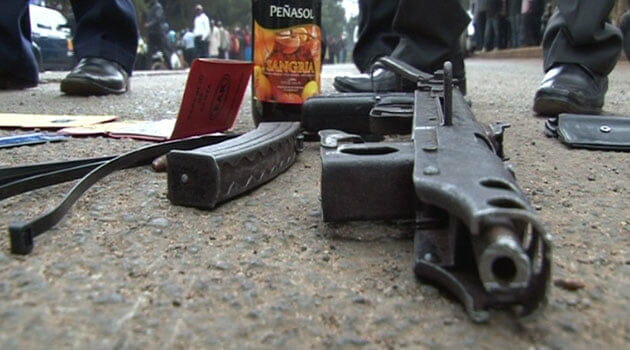 New statistics released on Wednesday show that Nairobi was worst hit by crime in the past year with 6,732 cases of crime while Isiolo County recorded the lowest at 219 incidents.
In Nyanza region, cases of crime increased by 22 percent while the Eastern part of the country insecurity reduced by 32 percent.

There were 69,736 crime incidents recorded countrywide in the year under review, representing a decrease of 2,456 compared to 2013.

The major causes of insecurity as identified in the report include; communal conflicts, terrorism, radicalisation of youths in Mombasa, Mombasa Republican Council activities, cattle rustling, drug trafficking and proliferation of small arms and light weapons.

Acting Inspector General of Police Samuel Arachi who released the figures said a 3 percent drop in crime was recorded countrywide.

With corruption being a major hurdle in the war against insecurity, Arachi warned that tough measures will be adopted against officers caught engaging in graft.

“Let me make this announcement, any officer caught in corruption issues will first be sacked. You will not go to court as a police officer,” he warned.

He revealed that soon they” will be issuing out the first batch of police officers who will be dismissed for engaging in corruption and then they will be taken to court.”

On corruption, the report indicates that, “In order to ensure accountability and ethical conduct by police officers, measures have been put in place in liaison with other stakeholders. Further to punitive measures taken, cases that emerge with little evidence that do not warrant prosecution are dealt with departmentally.”

Interior Ministry Principal Secretary Monica Juma has however assured of the government’s commitment to improve the security sector mobility and legislative policies.

“The threat that is upon us is serious,” she stated.

She defended the government against accusations of infringing on human rights through the recently enacted security laws saying they were only meant to protect Kenyans.