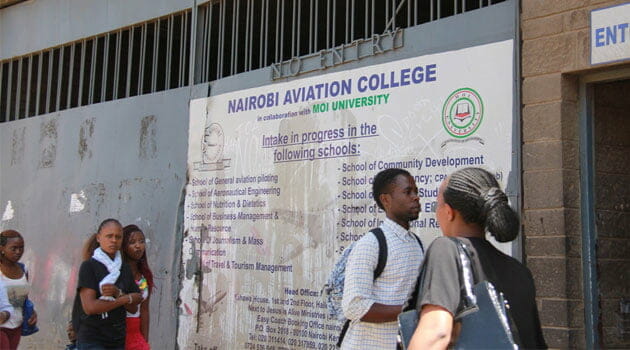 The Nairobi Aviation College is urging students who have not reported to school owing to reports that it offers sub-standard courses to resume classes as they await a report by the Ministry of Education which is probing the matter.

Led by the institution’s Chairman Peter Manyuru, the officials say the college was on the verge of closure as parents and students expressed reservations over the college due to accreditation concerns.

“The moment the expose was seen in the media our parents and students have lacked confidence in the institution. Some have been staying at home, not reporting to school simply because they are waiting for the government report but basing on what has happened today, I am confident that we are going to make inroads and go back to our normal operations and everything is going to be okay,” said Manyuru.

The officials insist that they are duly registered further stating that most of the courses they were offering were accredited even as others await completion of the process.

“We have all legal documents that are required by the ministry and by the relevant authorities to show that we are legally training and that is why we have produced people working in International airlines, parastatals, manufacturing sector, hotels among others,” added Manyuru.

While appearing before the National Assembly Education Committee, the officials said the expose was unfair, that it was one sided and they were not given a right of reply.

Their lawyer Sylvester Mukule who was present with them during the meeting said that NTV went against a court injunction forbidding them from airing the expose further stating the contempt of court proceedings would be heard next month.

They added that last month, the Ministry of Labour (Education Department) inspected the institution and the last inspection was done by the ministry September last year.

They maintained that their teachers were well trained and the ones interviewed in the expose were not part of the institution.

They have since suspended one member of staff who was shown in the expose, stating that she was engaging in corrupt dealings