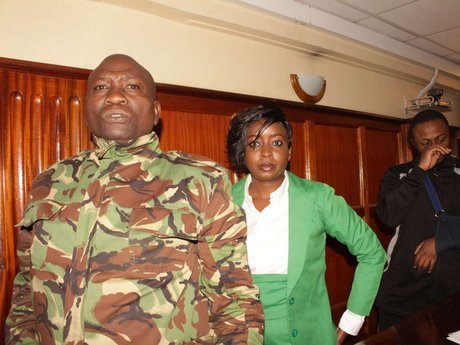 A stranger tried to interrogate Citizen TV journalist and murder suspect Jacque Maribe while she was held at the Gigiri police station, she has told the court.

The man who was booked in as a suspect would sneak into the women’s cell — which is against police cell policy — and ask her what she knew about Monica Kimani’s murder.

In a new affidavit filed in court yesterday, Maribe claims the man named Kennedy Omondi was booked into Gigiri police station with her immediately she was checked in.

He told her he had been arrested on drug trafficking accusations on September 29, lived in Kilimani and frequented a place called Rubi-Cut.

“He said that he knows my house in Royal Park. He repeatedly asked me questions that were not in the public domain then, including what kind of investigating officer Chief Inspector M. Otieno is,” Maribe says.

The TV anchor goes on to claim that Omondi told her that she was to be taken to Kiambu court on Monday, October 1, something that she did not even know then.

Maribe and fiance Joseph ‘Jowie’ Irungu appeared in court yesterday for the hearing of their bail application, which Justice James Wakiaga set for Wednesday next week.

Maribe asked the court to release her on a bail of Sh350,000 and one or two sureties of a similar amount owing to her humble circumstances and that of her family.

Maribe’s revelations are contained in her affidavit to counter the prosecution’s argument that she should not be released on bail because her life is in danger from third parties.

She said that she was only concerned about Omondi’s incident which she says happened on September 30 at the Gigiri police station.

Omondi enjoyed special treatment in the cells. Unlike other suspects, he wore his shoes, did not eat police station food but from Java and ‘always sought to share his food with me which I declined throughout.’

“He gave out to other detainees upon my decline. Nobody is allowed to share food in police detainment,” Maribe says.

ADVISED TO BE CAREFUL

Omondi was also allowed to keep and use his phone, a Nokia 3310, inside the cells unlike everyone else and was the ‘only male allowed to mingle with and interact with female detainees.’

“I was advised by other detainees and security personnel to be careful with him in view of his interest in my situation. The only risk I ran was therefore from the DCI,” she says.

Maribe says she was only charged because she was in a love relationship with a person the prosecution has interest in.

She admits to being in a relationship and living in the same house with Jowie, the co-accused.

She also allowed him to use her car.

“Except for these three aspects of association with a person the prosecution is interested in, the prosecution on its face has no witnesses and or forensic material to associate me with the murder directly or indirectly,” Maribe says.

“No motive exists, and none can be ascribed to me as to the murder,” Maribe says.

Maribe also says that the DPP cannot use her communication with Irungu as a basis to deny her bail as it has already been established that the two were lovers.

She further adds that she has never engaged in any communication with anyone to discuss the issue of the murder under trial whatsoever “and none of my communication supports the prosecution’s theory expressly or impliedly.”

Maribe adds that the investigators have had her phone since September 29 and have already told her that they have completed its analysis.

“If it implicated me, the DPP would have maintained it in this application,” she says.

On the allegation that Irungu burnt clothes in her house, Maribe says that she was was not aware of any burning.

“It is admitted that the 1st accused resided and lived in my house. The 1st Accused could, therefore, use the space on his own, and any of his actions are not necessarily sanctioned or attributable to me,” Maribe says.

She adds, “The investigators in the course of investigating showed me where they said the fire was lit. The location is not in my residence nor my compound. It is away from the compound hence it is false to allege the burning was within my residence.”

Maribe also says that her house should not be used as a reason to deny her bail as she has “surrendered it to investigators since September 28.”

She says she has no intention to re-enter her house or collect anything from or to the said house thus her release would not interfere with the investigations.

“I am a well-known TV journalist having worked at various stations the latest which is Citizen TV as a news anchor with an easily recognisable face. Most Kenyans are conversant with my job and face and can easily spot me anywhere therefore making it impossible for me to jump bail,” Maribe says.

He said what the media is doing is trying to influence his decision. “I believe in blind justice. When people try to influence me before I hear the case, I get upset,” the judge said.

Wakiaga openly expressed his feelings towards media saying his attitude is “negative’.

At some point, Justice Wakiaga asked state counsel Catherine Mwaniki whether she is the one giving media documents in the case that have been published. She denied giving out any documents.