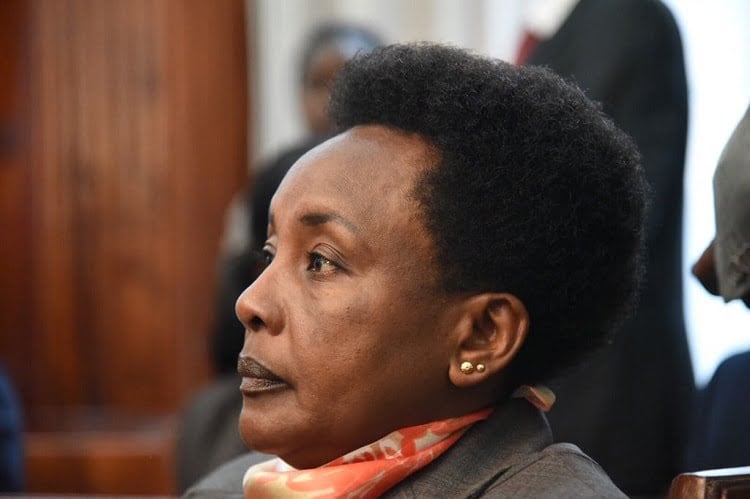 The Deputy Chief Justice (pictured above) has claimed that the corruption charges brought against her are meant to put pressure on her to resign.

In her further reply before court, DCJ Philomena Mwilu claimed there was a plot to prosecute her, including in the mass and social media, in an effort to embarrass her into resigning.

The documents obtained by The Standard state that no complaint has been filed before the Judicial Service Commission (JSC) by a bank or anyone complaining about her conduct.

“All I ever did was to take commercial loans that I have struggled and endeavoured to repay as contracted between the lender and myself,” reads Justice Mwilu’s reply.

“The attempt to charge me based upon abuse of office is a determined effort to embarrass me with an expectation that I will cave in and resign.”

She claimed that the boss of the Directorate of Criminal Investigations, George Kinoti, was out to settle scores.

Mwilu claimed she had never been questioned on the claims the State had levelled against her. These include the alleged preferential relationship with the Imperial Bank director and business manager, Mehbooba Jeferali Shamji.

Mwilu claimed she informed the lender that the purchase had aborted. She asked that the bank instead buy her two alternative properties, LR NO 3734/202 and LR NO 3734/209, for the same amount.

The two pieces of land were to be retained by the bank as security.

In November 4, 2013, the bank allegedly revised the loan to Sh60 million at her request. She was to repay it in 228 equal instalments.

The DCJ also said that she negotiated a Sh12 million advance, which was to be deducted from the Sh60 million loan, which she received on October 23, a month before the bank revised the amount.

The State has claimed Mwilu used her position as a judge to confer the Sh12 million as a benefit.

Justice Mwilu said she repaid the Sh12 million in two instalments and personally dealt with the receiver of the bank, Mahamud Ahmed.

“I am therefore surprised that more than five years after the bank advanced me the money and that close to three years since I have honoured my obligations to the bank and repaid the loan, the bank would purport to revisit the question of how I obtained the loan from them. This is strange and points to a fishing expedition with ulterior motives,” said Mwilu.

The judge, in a claim that now points an accusing finger to the lender, said Imperial Bank never bothered to secure the advance it gave her.

She said her actions were legal, including switching the security with another.

Although the AG is a member of the Judicial Service Commission (JSC), as is Mwilu, he said in his reply that no judge was immune to prosecution for actions taken away from his/her office.

“The petition seeks to give immunity to the petitioner from criminal prosecution for actions taken under her private capacity which immunity is not provided under the Constitution and applicable law and would in any event be discriminatory based on status,” argued Justice Kihara.

During the hearing before High Court Judge Chacha Mwita, the DPP said he was not interested in the removal of Mwilu from office.

Instead, he said, his role was to prosecute crime and leave the JSC and the President to determine her fate.

Through senior assistant directors of prosecutions Alexander Muteti and Dorcas Oduor, Mr Haji argued that Kenya had never had a pronouncement on whether criminal proceedings could lead to the removal of a judge from office.

“The question of removing a judge is clear in Article 168 of the Constitution, which states the DPP has no role to play on whether the judge should be removed from office. That lies with the JSC and the President,” argued Mr Muteti.

Ms Oduor said: “The question before the court is whether a sitting judge is immune to criminal proceedings and without being subjected to JSC.”

The court will also determine whether a judge can be charged before magistrates, who are her juniors.

“The petitioner contends that the very independence of the Judiciary will be at stake if she will be prosecuted. If the petitioner’s prayers will be granted then this will expressly interfere with the powers of the DPP to press charges,” argued Oduor.

She said the court would also determine whether it was discriminatory to treat a crime by a judge differently from that committed by an ordinary citizen.

According to the DPP, only a trial court could determine whether there was criminal culpability on Mwilu’s part.

Solicitor General Ken Ogeto, while supporting the DPP, said the case revolved around whether judges could be charged with crime and whether a judge should be removed from office before the criminal case was heard.

He also pointed out that the court would be asked to determine whether the DPP could take action against a sitting judge where JSC had failed to take action despite knowledge and information regarding the judge.

The DCJ, through senior lawyers Okong’o Omogeni and James Orengo, claimed that she was being unfairly charged for a commercial transaction.

According to the DCJ, her case did not require three judges to determine.

“We oppose the application filed by the first respondent. The issues raised in this petition purely relate to the exercise of the constitutional powers of the DPP which prohibit him from abuse of power in the exercise of those powers,” Omogeni and Orengo told the court.

Would you like to get published on Standard Media websites? You can now email us breaking news, story ideas, human interest articles or interesting videos on: