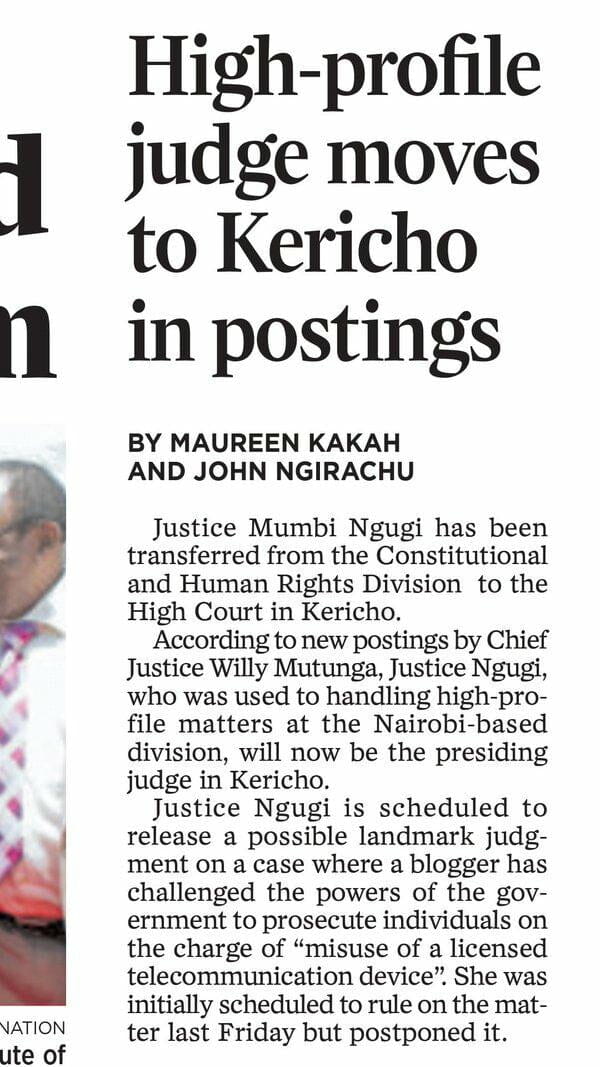 Chief Justice Willy Mutunga has moved Lady Justice Mumbi Ngugi to Kericho, only days after we wrote that she will be Kenya’s next Chief Justice.

Ms. Ngugi was moved on the day that she was set to deliver a landmark ruling where Geoffrey Andere had filed a petition challenging Section 29 of the Kenya Information and Communication Act Cap 411A is unconstitutional for being vague, overbroad and infringing on freedoms of expression as enshrined in the Constitution of Kenya.

Indeed, Willy Mutunga seems to have been compromised by the forces of impunity, as he has overseen the most corrupt judiciary in Kenyan history. He is definitely interfering with this case as he should have waited for Ms. Ngugi to deliver her ruling before transferring her.

Chief Justice Willy Mutunga needs to retire as soon as possible, as Kenyans are getting increasingly agitated by his constant meddling of constitutional case like he has done today.

Having a partisan and corruptible Chief Justice is a recipe for disaster in any country and Mutunga is setting Kenya up for civil disobedience, because the citizenry has lost all hope in the judiciary.

We all join hands to say that Chief Justice Willy Mutunga must go, and Lady Justice Mumbi Ngugi who is considered as the most competent woman in the judiciary, be named as the next Chief Justice.

Resign Willy Mutunga. Kenyans are tired of your posturing, grand-standing and theatrics of saying that Kenya is a bandit-economy yet you head the institution that can largely eradicate the same vice. You disgust us.

Women of Kenya, you can stand with Julie Gichuru, demonstrate for Waiguru, strip for Uhuru but you cannot stand for Justice Mumbi Ngugi? Pathetic lot!