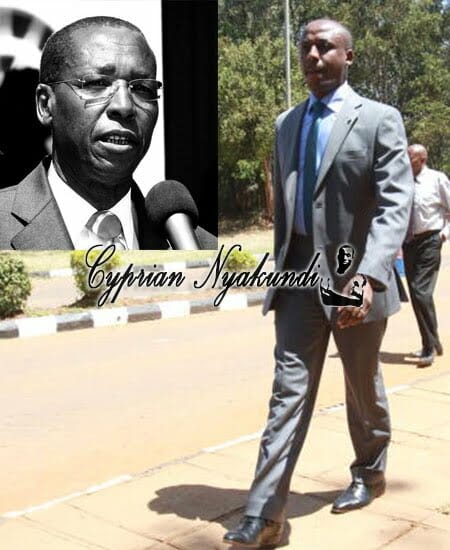 Makueni Senator Mutula kilonzo Juniour has kicked up a new storm by claiming that samples taken from his late father Mutula Kilonzo for analysis were tampered with. He Spoke to Mwaura Samora on his father death, his relationship with sister and fellow lawyer Kethi Kilonzo and his achievements as a senator You recorded a statement at the CID headquarters a few days ago claiming samples from your late father taken to Britain for pathological analysis were interfered with. Why? We have never established the substance that killed my father because from the way he died, pathologists agreed it was not natural. He bled extensively in the brain, liver, lungs and muscles. The body was still bleeding even during postmortem. He had three litres of blood in his lungs. We agreed that samples be taken to Britain for further analysis, but the specimens that got there were already tampered with. A crime has been committed in the process of trying to establish whether there was a crime in the first place. To me, this is like killing my father a second time.

Who do you think was responsible for this interference and why?
If I knew I would tell you. I don’t know. It could be anybody. But for sure, there was interference. Do you think there was foul play, and if so, who do you think killed your father? It’s obvious there was foul play. The doctors confirmed this when they said the kind of bleeding that killed him was not due to natural causes. This is confirmed by the fact that somebody is interfering with the samples to alter the outcome of the results. It’s an attempt on cover up. Even the Director of Public Prosecutions (DPP) ordered a probe, meaning that things don’t add up. As for who killed my father, as I said earlier, it could be anybody.
Will you be willing to reveal the findings to the public, even if the cause of death was “embarrassing”?

Senator Mutula Kilonzo was a public figure, and therefore the investigation of his death is a matter of public inquiry. He didn’t belong to us as a family only, but also belonged to the county and the country at large. Therefore, the postmortem findings will be made public. And even if there is an inquiry into his death, I want it to be public and open, so that the whole country can know the truth.

What are your milestones so far as a senator both in the Senate and in Makueni County?

I was the one who proposed the Bill that was recently signed into Law by the President, proposing recurrent budget ceiling for the counties. I have also introduced a motion seeking the establishment of an independent commission to solve disputes on boundaries of counties. In Makueni, I have been involved in many things, the major one being the push for the resettlement of Kibwezi Masongwaleni squatters who were evicted from Kyulu Hills water tower in 1986. For all those years, they have lived in squalid conditions without title deeds in a land bought for them by the government. I have also been involved in the war against illegal logging in my county by setting up the legal infrastructure to prevent this.
There was a scuffle in Makueni a few months ago where several people were shot. The governor is on record saying if he had died, he would have blamed his death on you. What is your relationship with Governor Kivutha Kibwana?

I have no issues with Governor Kibwana. We have never exchanged harsh words on phone, by text, email or any other form. The only time things got bad was during the scuffle you are talking about. I belong to the Senate of the Republic of Kenya, which is mandated with the responsibilities of oversight of all counties and he is the governor. We are two leaders working for the same cause.

How do you relate with your party leader Kalonzo Musyoka?

My relationship with the party leader is cordial. We frequently meet and discuss several issues, especially the party’s position on various matters. Before it was decided who should succeed your father, apparently there was some friction between you and Kethi over who deserved the seat… My younger sister is my partner at the law firm, and that’s a clear testament that we are close as siblings. When my father died, I was never a candidate, and in fact, I never wanted to vie. When she was approached by our coalition she actually said, “If there is anybody in this family who should be considered for politics, it should be Junior.” So there is no way there could have been a rift between us. I only came in after the issues that were raised about her candidature.