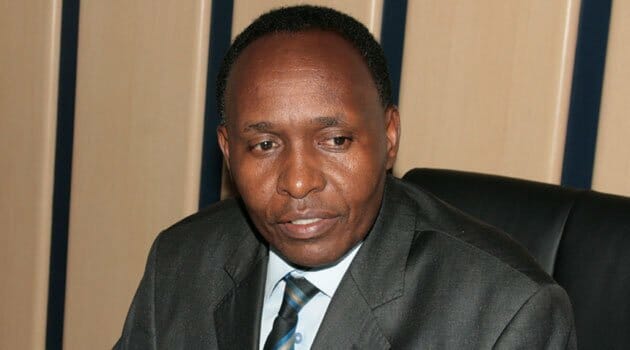 Defence Principal Secretary Mutea Iringo is on Monday set to appear before the Parliamentary Powers and Privileges Committee to be questioned over allegations of bribing Public Accounts Committee members.

Public Accounts Committee Chairman Ababu Namwamba during his questioning by the privileges committee alleged that Iringo had bribed some members to delete any adverse mentions of his name in an audit report.

He presented audio recording to the committee on a flash disk in a bid to clear himself against corruption charges.

Namwamba alleges the recording proves members of his committee including his vice chairperson, Cecily Mbarire, received a sh1.5 million bribe from Iringo and the promise of defence contracts to delete any adverse mentions of the PS in an audit report.

Iringo reacting to the allegations on March 12 termed the claims that he bribed members of the Public Accounts Committee as utter nonsense while threatening to take a court action against those implicating him.

He said has never and will never bribe anyone and challenged the MPs to come out in the open and stop taking advantage of parliamentary privileges to make statements bent on tarnishing and destroying other people’s reputations.

“I am shocked by the continued peddling of falsehoods of bribing Honourable Members of Parliament. I wish to categorically state that these reports are false, malicious and unfounded and are without any basis whatsoever,” said Iringo.

“I challenge those shielding behind the veil of parliamentary immunity to come out in the open and repeat the same allegations so as to afford me a fair chance of responding to them,” he added.

The PS said the issue of confidential expenditure had been put to rest as he had satisfactorily responded to the Public Accounts Committee over queries raised by the Auditor General.

“It is now seven months since all queries on this matter were raised and fully settled. I find the malice disturbing and calculated to tarnish my reputation. The people making allegations are good students of Hitler who are perfecting his theory to the effect that a lie repeated over and over again may appear to resemble truth,” stated Iringo.

He blamed the allegations being propagated on political games being played by the MPs.

According to the MPs, Iringo had promised to give them business in the Defence Ministry where he is the PS if ‘they did his work’.

One of the committee members Samuel Arama (Nakuru Town West) even confessed in the audio recording that he was given Sh200, 000 by Nyatike MP Omondi Anyanga who is reported to have been given over Sh1.5 million.

Although he refused to state where and when the recording was done and by whom, Namwamba who doubles up as the ODM Secretary General named the other individuals in the conversation as Nakuru Town West MP Samuel Arama, Suna East MP Junet Mohamed, ODM Party Leader Raila Odinga and himself.

Namwamba claimed the committee was being fought by certain forces due to the cases it was probing for instance the Judiciary, IEBC, the confidential expenditure issue among others.