Controversies surrounding the troubles faced by Nairobi governor Mike Sonko are meant to topple him from the county’s top job and replace him with a man from Mt. Kenya.

The calculations to achieve this puts the Nairobi County Assembly speaker Benson Mutura at a vantage position to take over from the troubled Sonko who is facing impeachment.

A kikuyu sitting in a prime position as that of the Nairobi governor is will possibly win the support of their community which will exit power in 2022, after two decades.

Sonko is allied to the deputy president William Ruto but with Peter Kenneth being out of the scene after his dismal performance in 2017, all the schemes aim at planting Mutura as the governor.

This is because the county does not have a deputy governor who would take over if Sonko was impeached but in the on goings schemes, Speaker Mutura is believed to have nominated Peter Kenneth to be his DG deputy who will eventually take over in 2022.

This plot is not achievable in the ballot because Kikuyu candidates don’t attract votes from other communities like a Luo, Luhya or Kamba candidate would.

The former Dagoretti South MP Denis Waweru is also being touted for the top job if Sonko is impeached because he is sycophantic enough, plus he supports the hand shake and the BBI report.

The scheme will take advantage of the loopholes in the constitution which will allow the acting governor to name a deputy.

And in a scenario where the battle stretches to the ballot, a Kikuyu candidate will win because ODM people will definitely back and cheer him.

PK is not getting enough support with many arguing that he has lost enough clout after losing in the 2013 presidential race and not going beyond party primaries in 2017. 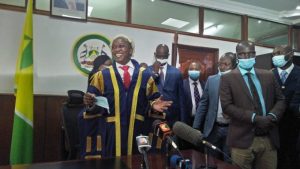 But he still stands a chance if handed the position to succeed Uhuru as Mount Kenya political kingpin.

The president Kenya Chamber of Commerce and Industry Richard Ngatia is also having his name infiltrating into Nairobi politcs after Sonko declared war on Ngatia him.

Sonko believes that Ngatia is one of the guys the ‘deep state’ has lined up to succeed him and Ngatia owes it to his network within the county.

But Sonko has since received a court stopped stopped the impeachment proceedings against him until his case is heard and determined.

The motion tabled by Minority leader Michael Ogada had 86 out of 122 MCAs append their signatures in support of the process to exit Sonko.

Speaker Mutura stands the chance to take over from Sonko who has not appointed his deputy since Polycarp Igathe resigned in January 2018.

The law requires that if both the governor’s and the deputy’s offices are vacant, the speaker acts as governor till elections are held within 60 days.

Mutura is a former Member of Parliament for Makadara but took over from Beatrice Elachi resigned.

He won with 99 votes, beating loud contestants including Ken Ng’ondi, Abdi Ali, Washington Makodingo and  Allan Mang’era after Jubilee and ODM agreed that Raila’s party was to take the deputy speaker’s position.