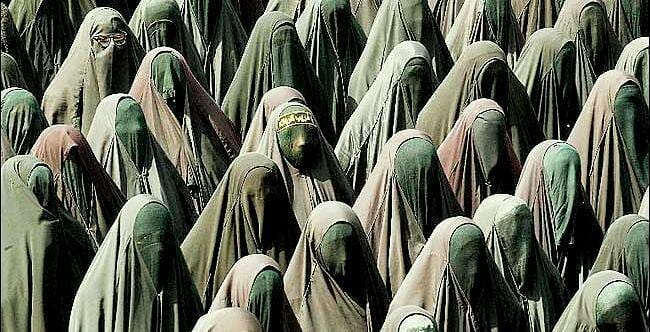 Okay, I think I’ve figured it out, it’s certainly not a religious requirement as there is no mention of it in the Koran, so it has to be something else that would convince a woman to cover everything.

Look at this way, we as males only want to see what women hide. Most women in public cover their back bottoms, front bottoms and their breasts… and that’s exactly what all we blokes want to see! Anything else is a yawn. Why is that?

Let’s take a back bottom. Well, that shouldn’t be of any interest as it’s a waste product source. A front bottom? I’ve seen quite a few of those and very few seem to be works of art. Breasts? Well I’ve seen blokes with better mammary glands, so what the hell is all this, “show us ya tits” business? The truth is that if women covered their elbows it would be, “show us ya bloody elbows”.

When women wore below-the-knee dresses we were looking for a bit of thigh but when they revealed their thighs we wanted to see a bit of bum and when they left their bums uncovered? Well it goes round and round in seductive circles, a slave to A-list fashions in Woman’s Day.

So, men are only bewitched by what women won’t allow them to see and as a bloke I reckon that’s bloody awright! I find a woman’s stomach very sexy but once I’ve seen it, I’m instantly thinking “lower”.

After all the burka covers every bloody thing! So any hot-blooded male should be crazy with desire at being able to see nothing!

After living in Saudi Arabia for a month I can see myself standing on a street corner saying, “show us ya, er… everything!”, before being carted off to jail.

I guess it’s like that well-wrapped Christmas present you’re excitedly undressing, tearing at the paper anticipating what it might hold… anything from Jaylo to Christine Milne! But once it’s laid bare, it’s all over and time for a leisurely beer.

So Muslim women have figured out how to make Muslim men permanently prefer them to a leisurely beer… clever!