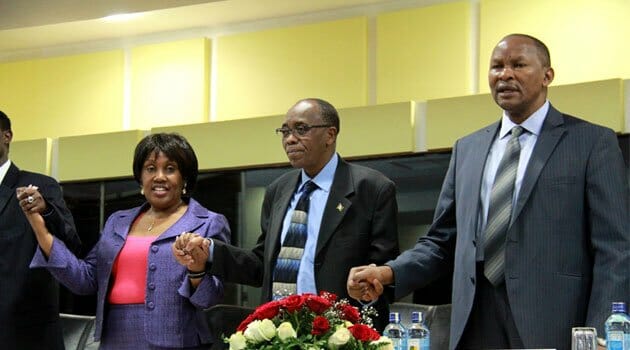 The Ethics Anti-Corruption Commission (EACC) on Tuesday launched a meticulous review of service delivery systems, policies and procedures and practices of selected points of entry into Kenya.
The 30-day exercise is aimed at reviewing various loopholes at the country border points that lead to corruption in a bid to come up with preventive measures.

The Head of Public Service and Chief of Staff Joseph Kinyua who launched the exercise however says the vice cannot be eliminated if all government agencies do not work together.

“We want to see better use of our limited resources in order to optimize the benefits that accrue with the Kenyan people,” he stated.

He challenged the commission “to take appropriate action against public officers that are found to be involved with corrupt and unethical practices. Let people who talk of their tribe after being summoned not stop you.”

“They use their tribe or communities when arrested…the guy is eating and living in his own kingdom alone but when caught, he starts claiming that his tribe is being targeted.”

EACC Chairman Mumo Matemu who spoke at the workshop says the commission will work closely with all other stakeholders to ensure they eliminate corruption at the border points.

He noted that inefficiencies at the border points have led to influx of illegal immigrants in the country, entry of prohibited and sub-standard products as well as tax evasion.

“The preventive strategy that we are undertaking today will also serve to create awareness in the public about our preventive role…it is better to prevent than to cure,” he stated.

Matemu further linked cases of insecurity in the country to the said loopholes; corruption being among them that has seen areas bordering volatile regions like Somalia left insecure.

The issue of illegal immigrants was raised a day after 100 Ethiopian aliens were arrested in Tassia estate in Nairobi, en-route to South Africa.

The 101 aliens were arrested late on Monday at a house in Tassia estate where they had been staying in preparation to travel to South Africa.

The commission hopes to develop responsive and effective system on enhancing on the controls that are required at the country’s entry points to such incidences.

“It is the commission view that ports of entry plays a major role in the country security system…effectiveness of the security control at the entry ports will assure Kenyans that we are not likely to go through what we have undergone previously by way of experiencing catastrophic consequences as a result of probably lapse of systems at border our points,” he pointed out.