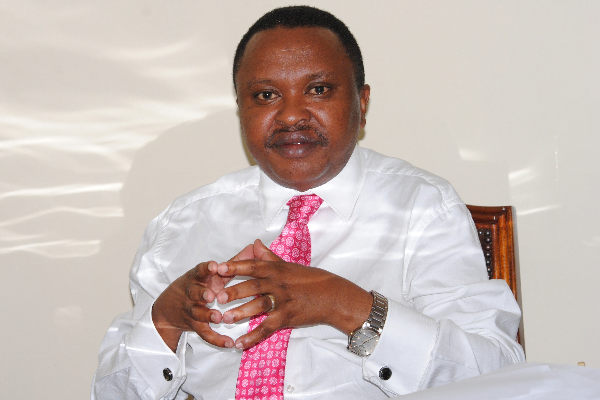 Sports Kenya CEO Gabriel Komora, together with the tender-committee Chairman Wilberforce Chebet have already decided on the winner of a recent tender advertised in the national dailies, this website can exclusively reveal.

In the normal Kenyan predictable way of doing business corruptly for personal gain, despite the glaring fact that all their networks have been exposed, and decision pre-empted, Gabriel Komora and Wilberforce Chebet are only awaiting for Chairman Fred Muteti to return back to the country and rubber-stamp their decision.

For those who may not be in the know, Sports Kenya in 2013 appointed a shadowy non-existent UK company called OpenSide Sports, to handle what was then conceptualized as the Magic Cup Tournament, with a view of hosting big teams in the country to help boost our nation’s image and build Kenya’s football profile.

OpenSide Sports is operated by a Kenyan based in London known as Kenneth Mathiiu, who was able to con Sports Kenya off USD 700,000 (equivalent of Kshs. 70 million) using a cabal of Britons who were presented to the media as licensed FIFA agents, who have previously worked with EPL side Arsenal and La Liga side Barcelona. It all turned out to be a fraud, as those fake Britons have never worked in the aforementioned clubs.

Over and above that, Kenneth Mathiu roped in Peter Kirigua, the owner of vehicle dealership Pewin Motors and current Chairman of Kenya Forest Service into the next deal, together with Sam Mwai, former CEO of Sports Kenya and currently the manager of Karen Golf and Country Club and operator of Icon Sports Marketing Limited. None of the said individuals have any background in football whatsoever.

It also later emerged that Sports Kenya CEO Gabriel Komora is the brother of Principal Secretary in the Ministry of Forestry and Wildlife, and Former Statehouse Comptroller Hyslop Ipu. Peter Kirigua’s Kenya Forest Service is a parastatal directly under Hyslop Ipu.

Mr. Peter Kirigua who is very connected in the corridors of power and highly liquid, was able to involve Deputy President William Ruto and Tourism Cabinet Secretary Phyllis Kandie. The tender was going to be a joint collaboration between the Sports and Tourism ministries. It is said from their circles that a Kshs. 10 million bribe was dispatched to the DP, who then arranged for CS Kandie to be the chief-guest during the opening of a new vehicle showroom for Pewin Motors at Karen.

Sports Kenya are now at a quagmire because CEO has drafted a letter expressing regret to competing consortium’s but the letters are yet to leave his out-tray for fear of the backlash especially now when corruption in Government is at an all-time high.

All of this comes at a time when President Uhuru Kenyatta has shown unusual support for football, going out of his way to sponsor Harambee Stars for a trip to Brazil for last year’s WorldCup and paying directly from his family’s kitty together with his wife, First Lady Margaret Kenyatta. The President has also contributed immensely to Gor Mahia and AFC Leopards and even after seeing the interest in football by the first family, Fred Muteti, Gabriel Komora and Wilberforce Chebet still want to embark on one of the biggest risks of their lives.

Sports Kenya has mulled cancelling the entire tender, but an advisory note by a representative of the Attorney General’s office who is a member of the board, indicates that all parties would be eligible to sue the parastatal for millions of dollars, as was the case with the Anglo-Leasing tender that was never delivered but paid for.

Sports Kenya CEO Gabriel Komora’s post is set to be advertised after staying in an acting position since January 2012, and Wilberforce Chebet is set to retire at the end of the year.

With the heightened scrutiny on this project, Sports Kenya officials fear arrest and prosecution by the Ethic and Anti Corruption Officials, for awarding a football tender to companies that have no football knowledge whatsoever, and operatives who have already embezzled Kshs. 70 million of state funds.

This website has also confirmed that the Sports Kenya board that includes eminent personalities like former Kenya Rugby Union (KRU) Chairman Mwangi Muthee, was not aware of the tender, and neither have they been consulted to aid in technical evaluations, despite the fact that they will be the first culprits and will be held accountable for the actions of Gabriel Komora who is a permanent and pensionable employee, while they are appointees who can be hired and fired at will.

As it stands, Sports Kenya Chairman Fred Muteti has to make public the decision this week and he is caught in between a rock and a hard place. Will he make the right choice, or will be succumb to pressure from Gabriel Komora, Kenneth Mathiiu, Peter Kirigua and Sam Mwai?

Stay tuned, because as we know Kenya, the wrong decisions are always made.