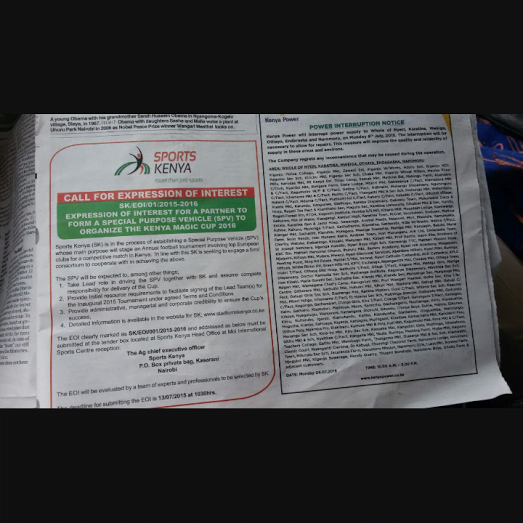 Photo Caption: The advertisement of the Magic Cup Tournament, as it appeared in local dailies. Fred Muteti denies that such a tender exists and says it’s propaganda by this website.

In a series of conversations with journalists and interested parties, over the period that this investigatigative expose has ran, Muteti also categorically denies the existence of a tender to arrange the Magic Cup Tournament.

The Sport Kenya Board has had to confront him severally over the matter that is now threatening to further damage the tainted image of individuals allied to the URP arm of the Jubilee Coalition who are viewed by th country as brutally-corrupt, and executors of industrial-scale fraud.

Fred Muteti claims that Sports Kenya has never advertised for such a tender in the local dailies, and that the only time it has ever appeared, it was done illegally and didn’t have the Sports Kenya logo on it.

Typical of the lying scum that he is, Muteti has imported the deceitful characteristics of grassroot-politics into a national boardroom, and a seat of repute.

“There is no such thing as the Magic Cup, and Sports Kenya has never invited bids for such an activity,” Muteti was quoted as saying.

He says that Sam Nyamweya and Gordon Oluoch are the ones who are financing the editor of this website (Cyprian Nyakundi) to finish his political career.

“We know that Nyakundi boy. We know he is a student. We arrested him and questioned him . He revealed that the two are the source of his leaks,” said Fred Muteti.

Football Kenya Federation President Sam Nyamweya was however not available for comment by the time of going to press, as he is said to be in Zurich, attending a meeting at FIFA Headquarters.

With the vehement denials and outright lies, it’s evident that Fred Muteti remains hellbent on ensuring that Sports Kenya secretly awards Pewin Motors Limited a tender to manage football tournaments, a company with no prerequisite capacity to execute a project of such magnitudes.

However Muteti is caught in between a rock and a hard place, as his entire game-plan has been exposed on this website, leaving him frustrated and out of options.

The editor Cyprian Nyakundi would like to clarify that at no point was he arrested. As of last week, his lawyers visited CID Headquarters and got an official clarification that they have forthwith, ceased pursuing him since  matter pertaining to Bidco was already in court.

The CID asked Cyprian Nyakundi to be wary of gangsters and extortionists, masquerading as police officers.