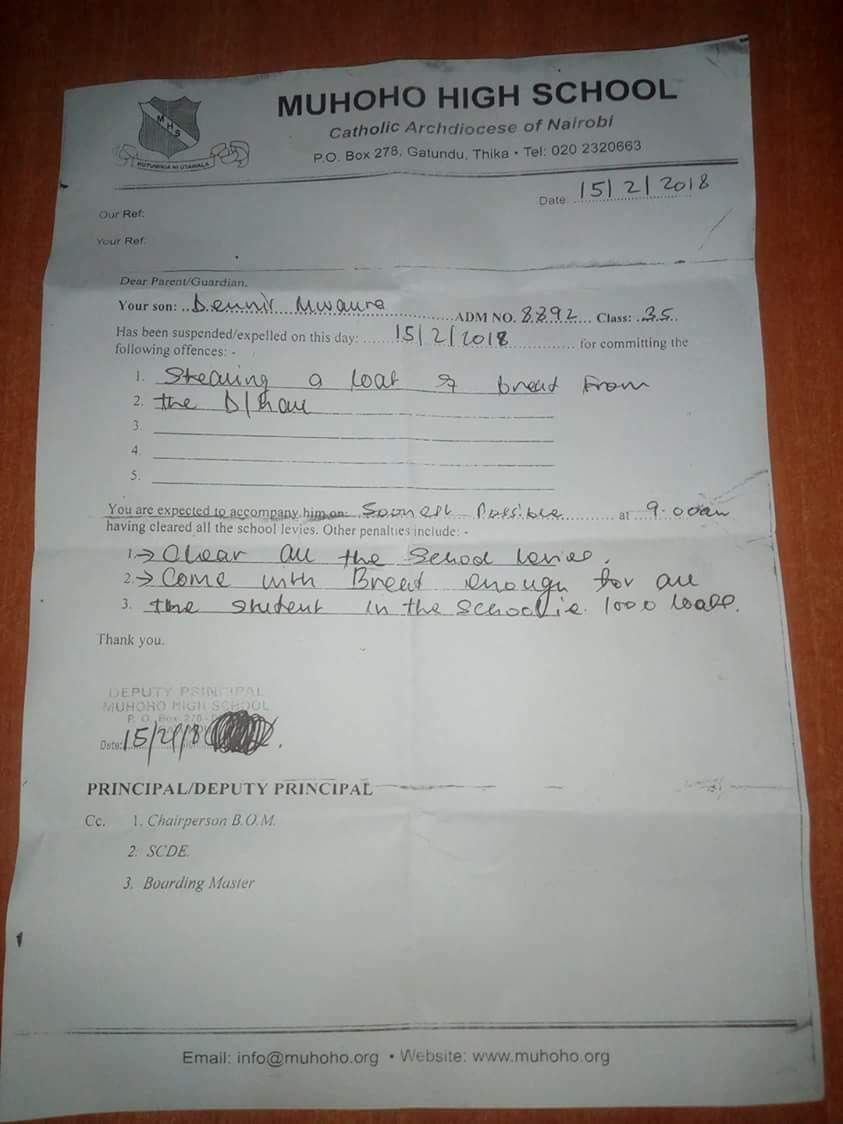 A letter doing rounds on social media shows just how archaic regulations in high-schools are ruining Kenyan education, further strengthening our view that 8-4-4 teachers should be sacked en-masse.

It makes no sense to implement a new curriculum, yet the same backward and disturbingly-near sighted teachers are still in-charge of dispensing their ignorance to students.

Apparently a student was caught stealing a loaf of bread in the school dining halls. Don’t forget that most of these 8-4-4 schools have head-teachers and their deputies who embezzle funds, by down-scaling budgets to leave them enough to pocket.

For instance, school menu’s are appalling, because principals and their deputies source for cheap food, leading to malnourished students who have stunted growth in Kenya. That’s why high-school students look like small boys these days.

But after stealing the loaf of bread, the deputy principal of Muhoho high-school is trying to create another vehicle to embezzle money through extorting parents. For instance, this student’s parents are being forced to buy bread for the entire school as “punishment”.

Muhoho is one of the retarded schools which is managed shoddily by poorly-motivated teachers, who try to connive ways for embezzling money.

It is this kind of pedestrian approach to education that has made Kenya produce mediocrity at all levels. Why should a student lose precious education time, just because of bread?

We reiterate our call to have all 8-4-4 educators relieved of their duties, beginning with the deputy principal of Muhoho High School, ironically named after the father of Uhuru’s mother Mama Ngina. His inherent stupidity and pedestrian approach to discipline is the reason why Kenya lags behind in matters development.

While students in the far-east are learning how to create scientific inventions in high-school, ours here are being suspended/expelled for stealing bread? Would a student steal bread if the diet was good?