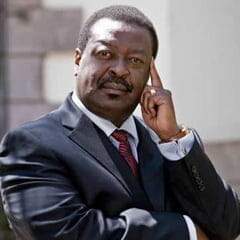 Someone said that Uhuru may be a one term president but another one said that in Africa you just need to win the first election legitimately and in the  second term you need a loyal military, Loyal Electoral commission and Submissive courts . Well, dont castigate me for Giving President Uhuru Kenyatta hints.

I know many Kenyans have been asking themselves why we dont have many Luhyas in the Jubilee government. The reality is that William Ruto has blocked all ambitious Luhyas from stepping foot in the Jubilee Government because he considers them to be a threat to his presidential dreams. Ruto knows it will be much easier to sell a Luhya as a presidential candidate than him.

Mudavadi is up for grabs. And if you are keen, you will notice that all politicians have started preparing for 2017. All the promises they made have expired and Kenyans should accept and move on. During Fidel’s burial, Mudavadi was spared by the charged mourners who were heckling everyone they perceived to be an enemy of Baba.

The Charged mourners listened to him keenly as others shouted” Rudi Nyumbani ” Mudavadi hinted that he can work with Raila because he has done that before. This statement has given TNA political schemers sleepless nights as they work day and night to win his support.

Mudavadi is  a bride that is intensely being courted bu both coalitions . The cold fact is that the political equation around Luhya politics revolves around Mudavadi who got over 500,000 votes emerging third in 2013 presidential elections.

Other Luhya leaders among them Wetangula are aware that Mudavadi towers above them as a national leader and sober politicians easily marketable all over Kenya. come 2022, Mudavadi will be a man to beat.

The Jubilee TNA side has set Marende and Jirongo to work out the Luhya unity formula. Marende is now chairing the KPLC after rejecting ODM chairmanship at the expense of the stillborn political party they intended for form with Jirongo. ODM spend a better part of last year begging Mudavadi to come back. ” We are ready to welcome the prodigal son home” .

There are murmurs within ODM that Khalwale and Wetangula bring no value to ODM.