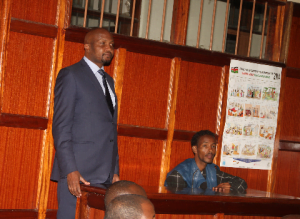 For the last two years, despite a mountain of damning evidence, I have always maintained that Moses Kuria will never be held accountable, let alone see the inside of a Jail. The national cohesion and integration commission is a useless and bloated institution, accountable to itself and always ready to nail the small fish when the big fish are free men.

The National Cohesion and Integration Commission is just another useless commission packed with political rejects of the ODM and PNU club. These fellas dont understand what hatespeech is, these fellas are just there to waste our taxes.

It seems they get their orders from somewhere. There is a command line that tells them who to accuse of hatespeech and who to drop their charges. This is why I am actually Ranting . The Star Reports .
Gatundu South MP Moses Kuria will not be prosecuted over the hate messages he allegedly posted on his Facebook page in 2014.

The matter will instead be settled in an out of court conciliatory meeting on Monday, the National Cohesion and Integration Commission said.

“Whereas the commission is mandated to promote conciliation and similar forms of dispute resolution mechanism in order to secure and enhance ethnic and racial harmony and peace in the country, the court has granted leave to pursue an out of court settlement in the matter…
It seems hatespeech becomes real when government critics post something on social media. We must verbalize this incredulity and boil issues down to the hidden reality. Mine is a seductive cry because I am a regular social media user and I feel that soon these guys will be at my door knocking and this useless bloated institution will trump up their flimsy charges against me – Of course for saying the truth .

We ask this question that we have always asked …Why Is Moses Kuria a free man. Is he the only man allowed incite the public against a specific community and walk scot free ? So did president Uhuru reward him for all this ? No..We need to snuff out this bias.
This is unfair