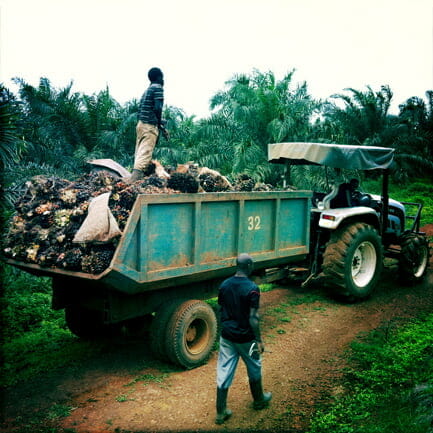 “My son, before BIDCO and other palm oil production investors came to acquire vast tracts of land on Bugala Island for palm oil production purposes, local communities around the shores of Lake Victoria used to live a good life. Our fish catch, especially species like, Haplochromines, Tilapia, Nile Perch, and Lung fish used to be good, enough to make us get money to pay school fees for our children and to cater for other household needs. We used to grow bananas, beans, cassava, maize and sweet potatoes, among others, which we would transport and sell in Kampala.

When BIDCO and other palm oil investors came, the government of Uganda convinced us to surrender our land to the investors on the strength that we would be adequately compensated and given land elsewhere. This did not happen. The money we were given was too little to secure an alternative parcel of land. Our fish catch has been declining at an alarming rate due to chemical effluent into the Lake. We are worse-off than we were in the beginning,” says John Baptist Kyambadde, a resident of Bugala Island, Kalangara district in Central Uganda.

The farmers who BIDCO gave agro-inputs at subsidized price to plant palm oil trees in their individual gardens later failed to pay for them. This forced many of them to sell their land cheaply in order to get food to feed their families.

Paul, one of the many affected farmers, owned about 14 acres of land on which he grew various food crops such as cassava, beans and matooke. He would sell some of his produce and get money to pay school fees for his children.

“When BIDCO came and convinced us to embrace its palm oil outgrowers  programme,” he says, “I joined, thinking that I would make good money. Unfortunately, like many farmers, I later failed to pay for farm inputs, forcing me to sell my only piece of land.”

Such heartbreaking stories are all over sub-Saharan Africa. Foreign investors financially backed by their home governments, transnational companies, corrupt politicians and selfish local rich people have for decades engaged in grabbing peasants’ land to use for their large scale tree plantations, biofuels and food production, mainly for export.

Millions of peasant farmers, women and pastoralists in countries like Ethiopia, Ghana, Uganda, Tanzania, Sierra Leone Mali, Ivory Coast, Liberia and Mozambique have lost vast tracks ectares of land to land and water grabbers. The victims have been rendered landless in their own countries and ancestral communities.

Information from Global Land project report, indicates that, by the end of 2009, an estimated 62 million hectares of land in Sub-Saharan Africa had been leased and was firmly in the hands of foreign investors for biofuel and food production.

A representative of Agro-Africa, a Norwegian company operating in Senegal, was one time quoted to have said, “We have convinced rural communities to grow Jatropha Curcas on their land measuring about 200,000 hectares.” In Tanzania, New Forest Limited, a UK based owned company is utilizing over 200,000 hectares of land for tree planting, specifically for timber and carbon credit. As land and water grabbing continues to skyrocket in Sub-Saharan Africa, hunger, famine, and malnutrition in Africa continues, yet the continent possesses 62% of the world’s remaining arable land.

While in 2003, the Heads of State and government of the African Union, adopted the Comprehensive Africa Agriculture Development Programme (CAADP) to spur food security in Africa, this is being negated by the fact that groups of people are being evicted from their ancestral and communal lands in a non-transparent manner, usually through, trickery, coercion, and intimidation, by land and water grabbers, supported by government functionaries. The Maputo protocol, in which Heads of State committed themselves to allocate 10 per cent of their National budgets to the agricultural is being implemented at snail-pace.

The trend where African transactional leaders, selfish tribal chiefs and corrupt politicians are conniving with foreign investors and governments to  in cheaply and freely dishing out Sub- Saharan African land for large scale food and bio- fuel production, for exporting abroad, in total disregard of locals protests is unacceptable. Africa’s citizenry must on the other hand be proactive and make productive use of arable land that is lying fallow. Whining about grabbing while the land is not being made use of is a sign of clouded thinking.

The author is a Ugandan based independent Governance researcher.