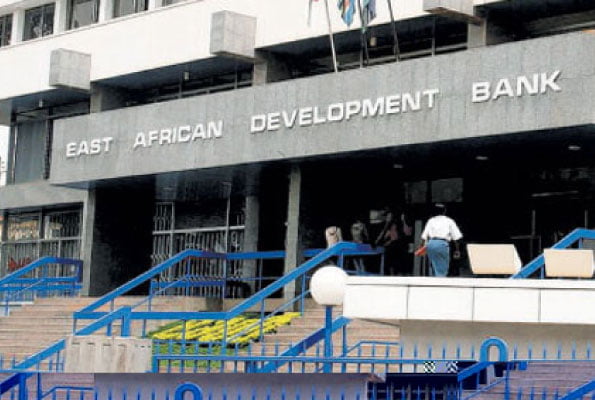 As Blogger Cyprian Nyakundi, I will continue to serialize the Rot at East African Development Bank in order to expose Dr. Kamau Thuge who is protecting Vivienne Yeda Apopo because they eat together.

The EADB Saga has been with us for more than 7 months since this  Community site started exposing the sagas surrounding the regional bank. We have continued serializing and posting all this information despite threats from Vivienne Apopo who a few months ago bribed Kenya DCIO officers to threaten the editor of this site.

Nyakundi has not committed any crime because he only posts verifiable information sent anonymously to him by Insiders because the media is too corrupt to expose some of these sagas.

First of all, we would like to confirm that the article that came out in the media (Money and Markets.co.ke) on the 18th January was authored by Vivienne Yeda and her accomplice George Ayella using a certain PR firm which is paid using bank money accusing Ann Kabagambe, board members and some staff. The allegations in that dossier are all false.

No one is fighting Vivienne; it’s her past actions that have come back to haunt her. All we are fighting for is to return sanity and integrity back at the EADB. Like we have said in the past, the bank will never be healthy again unless Vivienne has left the service of the Bank and the earlier, the better.

We have done all possible to give you access to information regarding her lack of integrity. We are also aware that the E&Y report has also given you the picture much as this audit (as reported to you previously) was interfered with by the presence of Vivienne in office during the audit process. All the same, we shall continue bringing you evidence on her lies.

Vivienne’s performance should be judged among others based on performance and good governance, integrity, accountability and good leadership. She has failed on all of those because even the profits she has been reporting to you and the public are false profits. We can actually say that Vivienne has committed criminal acts by reporting to you the profit figures she reported especially for the year 2015. But these lies could easily be traced backward to the other years as well.

We bring you the attached evidence from communication between Vivienne and various staff members including the Ag. Finance Manager (who as we speak was sent on a one-week disguised leave to pay the way for Vivienne to effect dubious payments and pass crafty entries into the system to report increased profits, which actions the Ag. Finance Manager had declined to implement because they are illegal).

We have attached documents (DOCO 1 to 9), we will describe each document for your clarity. The background to this is that, towards the end of the year 2015, Vivienne retained the services of Knight Frank to value the bank properties in Uganda, Kenya, and Tanzania. Knight Frank carried the valuation and prepared a report which was presented to Vivienne.

The report had presented values indicating a loss in value of some of the properties in Tanzania. This would have meant that she reports a lower profit. She then hired another firm in Tanzania called African Properties, who they influenced to give a higher value of the property in Tanzania which was not in line with fair market value. (DOCO 1 confirms that indeed the two companies were hired to carry out the valuation of standard practice which requires all assets of a company to be valued by one firm even if in different countries as long as the best firm has presence in that country which in this case Knight Frank does have offices in Tanzania).

To make matters worse, she picked the inflated valuation figures from African Properties Ltd report for the Tanzania bank assets and inserted those figures into the Knight Frank report which was then presented to the external auditors for inclusion in their audit report. One of the attached documents highlights clearly an email from the Ag. Finance Manager to Vivienne indicating that what was done is not acceptable according to accounting standards).

Because she always manipulates the property valuation figures to help her lie to the public and yourselves that the bank is making profits. This is criminal. She should never have misrepresented the Knight Frank report by inserting inflated figures from a report by African Properties Ltd.

She should also not be forging profit figures. The attached documents are email communications between Vivienne and other staff members clearly indicating that what was done was illegal and not accepted. Please read through all the 9 emails attached. Knight Frank has the right to sue the Bank if this incidence is brought to their attention that their report was misrepresented for purposes of falsifying bank profits.

Indeed if Vivienne continues being protected and she does not leave the Bank services immediately, Knight Frank will be informed about these fraudulent activities involving their reputable name. With all our evidence, it will be easy for the major media houses to give us an ear. We won’t go to them yet unless you don’t replace Vivienne.

It is surprising that even after this was reported earlier in our reports, Vivienne is still trying to falsify profits for 2016 using the same approach. Knight Frank was again retained to value the assets for the year 2016. However, the properties in Tanzania returned a fair loss value of USD 2.2 million which will be reflected in the Profit and Loss account and therefore used to declare lower profits. Because as usual Vivienne wants to report to you false high-profit figures dubiously, she has repeated the same process.

She has hired services of African Properties Ltd who have given a figure which she wants to insert in the P&L. However, the Finance team has declined this action this time around. A meeting was even held recently with PWC partner called Mayanja to try and convince them to consider the figures from African Properties Ltd (since they are easy to manipulate as opposed to Knight Frank).

The PWC partner had been briefed about what they were made to do last year and therefore have refused to use valuation figures from different firms as it is against standard practice. The attached emails can provide evidence to that effect. We have copies of all the assessment reports from both firms for 2015 and 2016. We hope E&Y revealed much of this informed in their forensic audit report. But we chose to share these details with you because we know the level of interference that happened during the review process.

Firing Vivienne right now is a much safer option for that Bank than pretending to leave her to continue in fear that the Bank’s reputation will be affected. If she continues working at the Bank, we shall have not options but to share all our evidence with lenders, rating agencies, international organizations, etc.

Please allow EADB to start on a clean slate with a new DG. Vivienne has played her part and therefore should pave the way for a new broom. She has failed to grow the book and that is why she has been manipulating different elements of the P&L to help her declare profits. Now that there are not more recoveries and yet we are not lending as much and then her dubious ways of reporting profits have been discovered, the picture of the bank will change. A new DG will bring a new perspective into the Bank, stability, and growth.

We would also like to confirm to you that in early 2016, Vivienne had applied for a job at AfDB as the General Council and she was due to leave EADB around midyear. If it was not for our intervention that exposed her, she would have resigned to take on the job at AfDB and left you and the bank in air.

The AfDB Directors can confirm this information on the board. Therefore she should not lie to you that she has this bank at her heart. She is a very selfish person who works to satisfy her own needs and not others. Since it was in her plans to leave the Bank last year, let her leave the Bank now. Vivienne cannot any more work with staff members and a cross-section of the board whom she has accused.

Imagine how the Bank is going to get support from AfDB when the DG has falsely accused the AfDB directors of fighting her. This bank and the staff have gone through a long suffering. This suffering should not be allowed to continue. Institutions are never left to suffer for an extended period just because one individual is playing politics with everyone. We request that the Board comes out very boldly with a decision on the way forward which should be communicated to both management and the staff of the Bank.

Continuing to keep quiet even when we are aware the audit report is out and we have also supplied you with evidence, will put the bank in a more dangerous position. Please read all attached emails from bottom to top