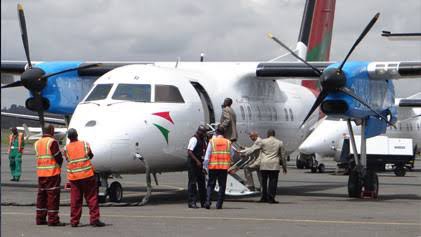 In court, few people have taken interest in the case involving Yusuf Abdi Adan and the ownership of Blue Bird Aviation, one of the largest airlines in the country — after Kenya Airways.

But the case has opened a lid into an intriguing multibillion-shilling business — the aviation and miraa (khat) trade — and a boardroom war that has spilled from the courts to the Directorate of Criminal Investigations.

A self-made billionaire, Mr Adan is so reclusive that few Kenyans would pick him out in the streets of Nairobi – where he owns Yala Towers and Lenana Towers, among other high-end properties. His partners are as filthy rich as well. They own shares in airline business, and multimillion-shilling properties.

Mr Adan had entered into the miraa business in the 1960s and by 1970s and early 1980s, he was commanding the Meru-Chuka trade routes as his Toyota Land Cruisers dodged shifta bandits to deliver miraa to towns like Mandera and, across the border, in Bura Hawa inside Somalia.

For years, miraa trade and use had grown among the Muslims, who eschewed alcohol, and with urbanisation, it had been embraced by the youth to keep them alert. Fresh miraa was always in greater demand and fetched better prices in urban centres, and that explains why speed was (and still is) of essence in the lucrative industry.

As Mr Adan’s trade blossomed, so did unrest in north-eastern Kenya intensify in the early 1980s and would reach its height in 1984 with the Wagalla massacre, leading to insecure routes and a near-collapse of the miraa business. While there was amnesty offered by President Daniel Moi for all bandits to drop arms, the miraa trade suffered after then Somalia president Siad Barre ordered a nationwide ban on miraa in 1984. His intention, according to historians, was to punish the Issaq clan who commanded the trade routes and were opposed to him.

Unable to reach Mandera by road, Mr Adan decided to start lifting miraa from Nairobi’s Wilson Airport where he leased aircraft from various companies. It was a first in the miraa business, whose transport had evolved within one century from camels and vehicles to aeroplanes.

With the success of his business, he invited two ex-Kenya Air Force officers, Col Hussein Farah and Major Hussein Mohammed to form Blue Bird Aviation Company in 1992. Another entrant was a pilot, Mohammed Abdikadir and each owned 25 per cent stake in the company.

“We bought one aircraft and as a businessman who used to trade in miraa, I used to provide the sole business,” Mr Adan would claim in court papers, which have shed light into intrigues in the multibillion-shilling business. It was this Cessna 402, registration 5Y-LAM, that would be the foundation of Bluebird Aviation, which today owns a fleet of 19 aircraft.

In the matter, a part of which is now heading to the Supreme Court, Mr Adan has accused his co-directors of “breach of trust, fraud, money laundering and theft” and seeks to wind up the company –  and get a resolution on the valuation of a firm he helped build.

With the collapse of civilian government in Mogadishu in 1991, Somalia plunged into turmoil and only a few daring traders would venture into the murderous mayhem. Bluebird Aviation, which had a near monopoly in the Horn of Africa, was one of them, and daily they delivered their cargo of miraa to Somalia.

The elderly Mr Adan says in court papers that for 23 years he had left the running of the company to the three co-shareholders: Mr Farah was the chairman and chief executive, Mr Hussein Unshur was the general manager and finance director while Mr Mohammed Abdikadir was the technical director.

Without holding any position in the company, Mr Adan told the court that he based everything on “trust”.

“I have never questioned their actions or activities and trusted fully that the defendants will not steal from the company,” he says. “These human virtues are priceless in people of my age, generation and who had no formal schooling.”

“As long as all was fine according to what I saw with my naked eyes, then I hoped and prayed that all was fine,” he said in one of his affidavits.

For 23 years, he told the court, he was never invited for board meetings, nor was he presented with annual financial statements. Instead, when he asked his co-directors for dividends, they “would come with a polythene bag containing some money … and always promise that I will be paid my share of dividend.”

Although the airline grew to become the second largest operator in Kenya, taking advantage of the insecurity in the Horn of Africa, the man claims that in 2015 he was asked to sell his shares. He also claims that the company runs a lucrative multimillion-shilling deal with a foreign government.

It is the valuation of this company, at $120 million (Sh12 billion), that would allegedly form the basis for the fallout between these partners after he rejected an offer of $30 million (Sh3 billion).

“After a heated exchange, (Mr Hussein Unshur, the finance director) told me he would add a further $15 million (Sh1.5 billion) as a gesture of goodwill,” he says in court papers.

He is now accusing his co-owners of running “secret and parallel accounts” where all cash payments are recorded.

“After a certain period, the money is transferred to offshore accounts through either local Hawala money transfers or physical transportation either through Jomo Kenyatta International airport or Wilson Airport,” he claims in court papers.

Documents filed in court show that Bluebird Aviation has offshore accounts and that some of the directors operate the said accounts at Ajman Bank in UAE under the name of Amazon International FZE.

Mr Adan claims that money deposited in this offshore account is used to purchase aircraft, which are then sold to the company through lease-purchase agreements “at massive profits”.

While Mr Adan claims that Mr Mohammed Abdikadir had acquired 49 per cent of another airline, 748 Air Services, through an exchange of two Bluebird Aviation aircraft, a director of 748 Air Service, Mr Ahmed Jibril, told the court that neither his firm nor its Barbados-based sister company has any interest in the running of Bluebird’s affairs and that they should be struck off the suit. In his affidavit, he says that the 748 Air Services Kenya’s leasing deal with Bluebird is clean and known to the Kenya Civil Aviation Authority (KCAA).

“If Mr Abdi contends that Bluebird did not receive the payments or that Mr Adan did not have authority to enter into the agreements, I verily believe that his recourse lies with his co-directors,” Mr Jibril says.

Initially, Mr Adan wanted to sue together with Bluebird Aviation. But the court ruled that without approval of the company board, he could not.

“The general principles of Company Law are well established that, a company is an association of persons formed for the purpose of some business or undertaking which has a legal personality separate from that of its members,” Justice GL Nzioka ruled.

“That legal personality of a limited liability company is that it acquires its own property, rights and liabilities separate from its members upon incorporation. … While companies are owned by their members, the shareholders, they are managed by a board of directors. The duties owed by the board are fiduciary in nature and are owed to the company rather than the shareholders.”

For a company that is building a new terminal in Hargeisa and owns properties in Somaliland, the boardroom wars between the shareholders will open a nasty lid into one of Kenya’s largest private firms.

At the end of the saga, it will be a story that tests trust in businesses — and offers a window, even for the taxman, into how regional miraa trade is conducted.