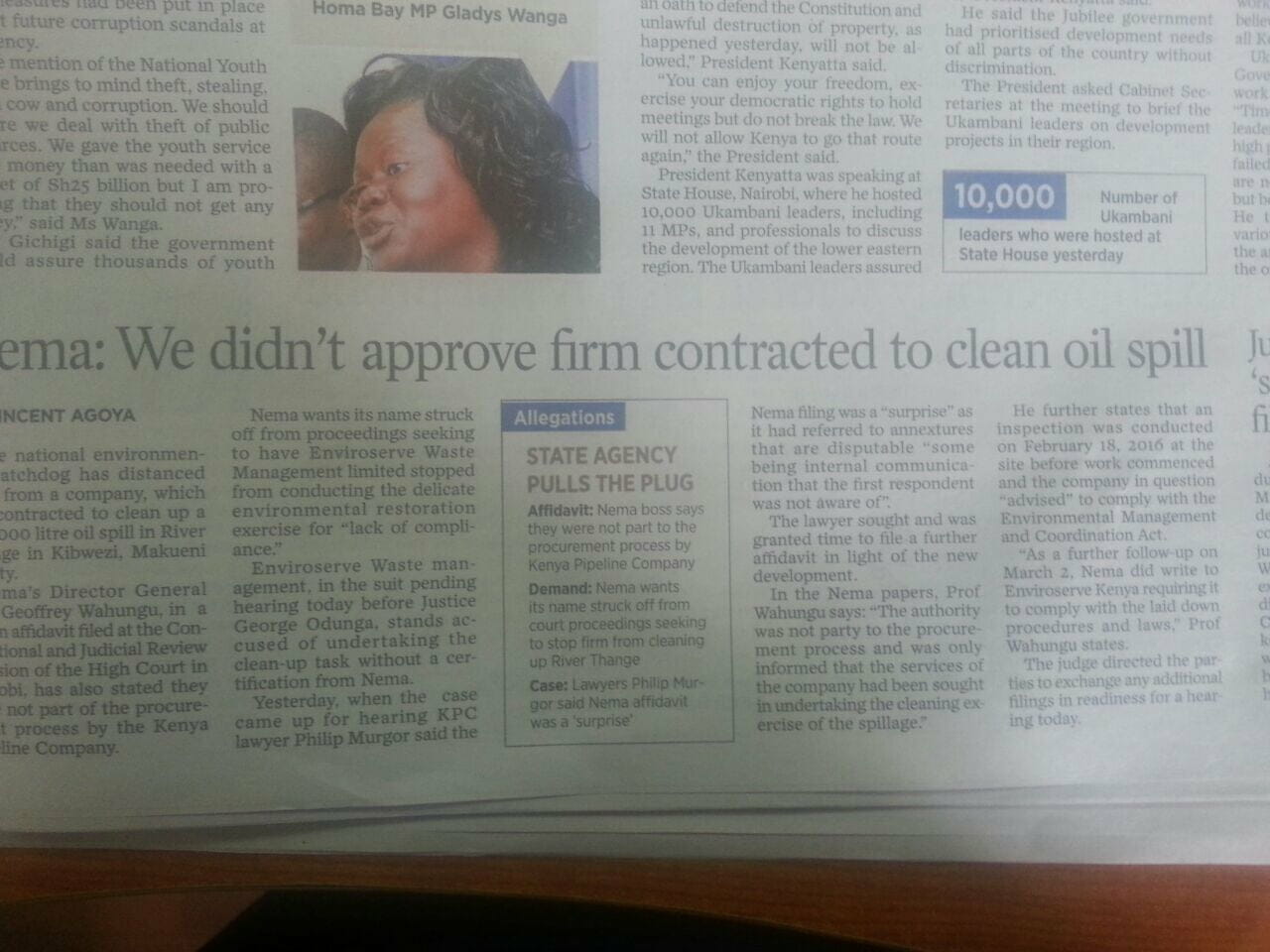 When we talk of the corruption at Kenya Pipeline Company (KPC) we don’t mince our words. This issue has ended up in court due to the sheer scale of corruption involved. The Chairman of KPC has been advised severally that KPC has cartels embedded in corrupt cartels and Jubilee thieves, but he appears to take it for granted (probably because he’s also in on it) and its high time whoever is involved in this scandal is charged and prosecuted.

Find attached an article in yesterday’s Nation pointing to mega corruption with regards to this deal. The said company has already been paid Kshs. 320 million. its a 24 months contract where they will guzzle 1.2 billion.

1. KPC had a budget of 40Million which was then revised to 140 million under unexplained circumstances. We are reliably informed that 1.2Billion will be paid to this company in 24 months.

2. Initial tender evaluation report by an earlier team objected the consultant EnvironServe Waste Management Limited due to lack of capacity, ability and lack of a National Environmental Management Agency (NEMA) License. NEMA have already sworn and affidavit in court to this claiming that this company does not have capacity to undertake the clean up exercise.

3. All the staff who declined to grant EnviroServe Waste Management Limited the said tender Namely Ms Lucy Kariuki, Ms Nancy Ndathi, Wlkister Omondi, and Robert Kamau have all been punished and transferred from Nairobi. They were all commanded to award the contract to this company but due to their level of integrity they said no. Punishing innocent Kenyans at the expense of looters.

4. EnvironServe Waste Management Limited was registered 2013 and does not have the capacity to carry out the contract.

5. NEMA has stopped the company from undertaking the said clean up exercise so the paid 320million is already gone to waste and people are still in office despite this astronimical and mind-boggling theft by the Chairman of the board together with other executives who awarded and recommended this tender to Environserve. M/s Beatrice Orugut, Mr Samson Soimo, Ms, Gloria Khafafa, and Nicholas Gitobu are thieves who should be in courts now for abuse by overlooking concerns raised previously by an earlier evaluation team which has now gone to courts. They have been vindicated.

6. There  is no clean up that was undertaken by the bogus consultant. Kenya Pipeline through its internal mechanism had already made the clean up since last year and the consultant has done nothing to justify payments of such monies. Pure looting of tax payers money for nothing done. White collar thieves.

7. Government’s Doctor said people were not affected by spillage. These quacks went for a private doctor of-course at a fee to justify payments.

What can justify KPC to pay 1.2 Billion to a fellow who does not have capacity? Isn’t this blatant abuse of office by KPC managers? don’t they deserve a date in court for this abuse of office and corruption?

It’s now clear why Kenya lost the oil pipeline deal to Tanzania, because KPC is a den of thieves, whose main agenda is to loot money so that board members and top executives can build flats or take their hoe’s on foreign trips.