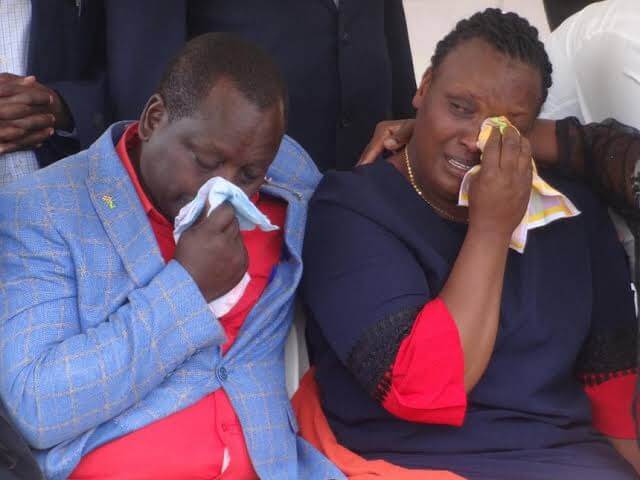 CAPTION: Monica Kimani’s father shedding crocodile tears. While he was purporting to mourn, his real sorrow was that he won’t be getting a V8 as promised by his late daughter anytime soon. A despicable creature this one!

It sounded very strange when this religious-degenerate masquerading as Monica Kimani’s father, shed crocodile tears during her requiem mass, not because of the loss of a daughter, but because he never got the V8 that she had promised him. These are the kind of parents we have today, tooled by the church to worship money and earthly things.

That’s why when you go to your church, politicians and high net-worth individuals get special treatment. Because religious leaders are no different from the prostitutes on the streets. They’re probably worse. Hiding behind the cloth, these deluded wankers use their position to access wealth from churchgoers. Money is the biggest priority for them.

Look at this asshole and chain-smoker called Cardinal John Njue for instance. He is always following Uhuru and Ruto around with his smoked-out black lips. Following corrupt people. And somehow dumb worshipers still regard him as some saint. Rubbish! If there are people who will go to hell before the rest of us, it’s religious leaders.

Kenya will be saved by the people who have chosen to boycott the church. For as long as you still attend church, and still maintain proximity to some religious deity who is micro-managing your home and work affairs, you are one sick fucktard who needs psychological help. Young people, save yourselves and stop attending church. Seek development from logic, invest in sciences, let’s seek new ideas without the toxicity of religion.

Anyways, according to Githeri Media reports, Monica Kimani’s lifeless body was discovered by the brother who was having a conversation with her on phone. The next morning, it is not clear who accessed her apartment first, but a note from a South Sudanese cartel man, seems to indicate that Monica’s dad picked some confidential material from her apartment.

The documents seem to have also been stolen by Monica from the South Sudan Speaker’s office back in Juba. She was having an affair with the old thief and plunderer of South Sudan’s oil-wealth, and her death must be linked to South Sudan cartels operating in Nairobi. 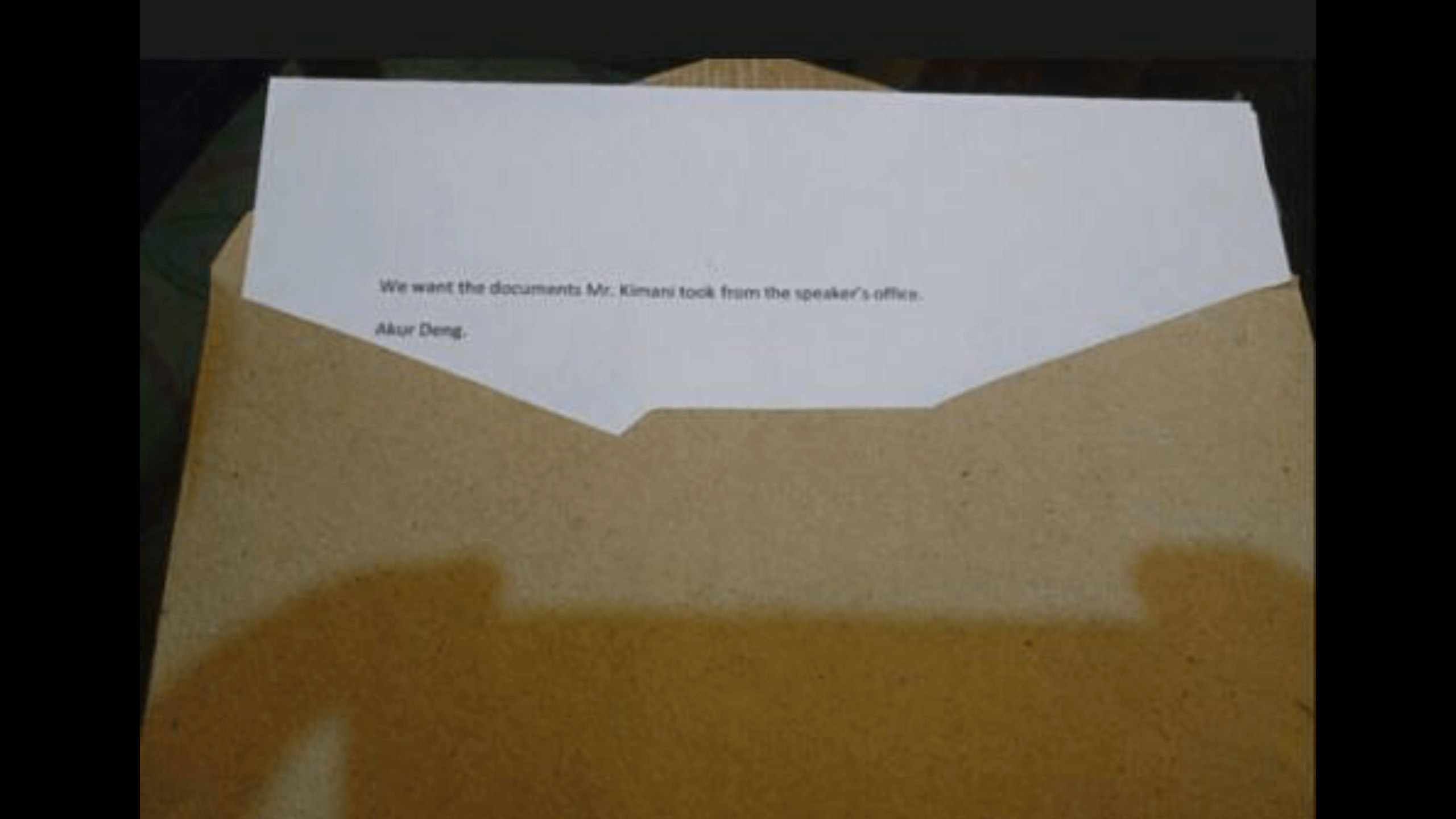 CAPTION: This threat from South Sudanese Cartels was sent to Monica Kimani’s father. He didn’t report to police, probably because he’s the one who took the money from her apartment. These pastors are real thieves.

I once called for the deportation of all South Sudanese from Kenya so that they can go back to that shit-hole of a country. Why do we allow them to come here and spend their stolen money instead of building their fucking country? These South Sudanese assholes should head back to their country.

As the saying goes, the only good police officer is a dead one. And the shoddy handling of Jowie Irungu’s investigation points to that. For starters, they lied about CCTV footage being available to the effect that it placed him at the scene of crime. What these Githeri Kiganjo failures did was leak to the media that Jowie is the main suspect, then planned a sham witness line-up at Kilimani Police Station.

The so-called “witnesses” who are maasai watchmen, had already been brainwashed with the image of the man who was supposed to be framed. The line-up included policemen with walkie-talkies but somehow these pastrolists only saw Jowie.

Then afterwards, the same Kiganjo idiots conducted a search at Jacque Maribe’s house. From there, they stole all of Jowie’s tactical equipment including uniforms, sun-glasses, and a tactical band. That’s the gadget which they claim slit Monica’s throat yet it’s incapable and the pathologists would have said so too. These fuckin DCI crooks even stole Jowie’s shoes! What an embarrassment to Kinoti. He needs to get his house in-order or resign.

Did Jowie shoot himself? Well apparently Jowie is a left-handed person. Secondly a medical report indicated that the bullet penetrated from the back. All those reports have been suppressed and you will only hear what the media and Dennis “Poems” Itumbi want you to hear. 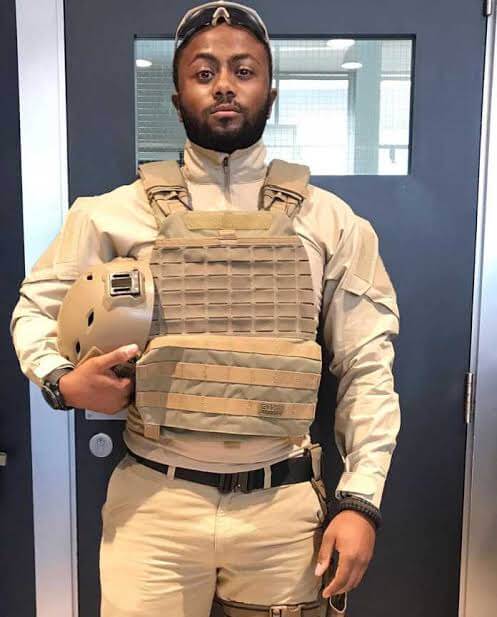 CAPTION: These military kits that Jowie owned were stolen by policemen who were investigating and searching Jacquie Maribe’s house. Never allow policemen into your homes. These are thieves in uniform. Don’t even entertain friendships with them. They are the ones who plan robberies.

Then we have the case of old grandmother Kirigo Ng’arua. From the get-go, Kirigo had been trying tooth and nail to sabotage the relationship between Jacque Maribe and Jowie. And when this incident happened, she started leaking to Government-friendly blogs reports that she had warned Maribe to ditch Jowie.

Why do women always come in-between relationships of their friends? Can’t people mind their own business? Kirigo you need to get laid my sister. Your sexual starvation should not be reason for sabotaging other people’s relationships.

Moving on, Jowie is now in remand after a very strange assertion from Justice Wakiaga referring to him as a “Woman Eater” . Surely, which school did this retarded clown attend? Is it Daystar  University? How do you use street-analogies to make a ruling that students will most likely study in school? It shows that his ruling was drafted by a court-clerk like how Brian Yongo used to write submissions for “top” lawyers in the country.

In remand, Jowie has been denied medical care and is being given panadols only. His family was recently compelled to pay for his surgery at Kenyatta Hospital, which has not taken place yet. The Plan according to a Prison’s source, is to ensure he dies in custody like former Nairobi Town Clerk John Gakuo.

At some point, they were even drugging him and he was never sure of himself whenever they went to court.

Would you like me to dig more on the inconsistencies surrounding the bogus investigations surrounding Monica Kimani’s death? Share the article in your Facebook page and WhatsApp Group.