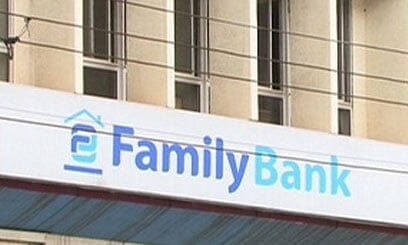 The Kenyan Financial industry is built on quicksand and can collapse at any given time, something we have always told our ardent readers. We recently exposed how Equity Banks’ James Mwangi stole sh 60 Million from an account holder under court order. We saw stupid arguments like ” James Mwangi can’t steal 60 Million because he is already rich ”. That’s how the pathetic 8.4.4 system has programmed Kenyans, not to think, not to have brains.

Serious institutions supposed to fight against Fraud and illegal practices have been bribed or have incompetent political appointees who got jobs based on political patronage and not merit.

For instance, the pathetic Kenyan Journalists churned from Daystar University have refused to do an investigative piece on Family Bank that features in almost all Money Laundering Scandals. Brown envelope Journalists like Wallace Kantai and Terryanne Chebet must know that doing PR for the corrupt can’t help at all. As they copy-paste press releases, Kenyans are watching.

Additionally, former head of civil service Ambassador Francis Muthaura’s son is the head of the Capital Markets Authority (CMA). Other than spending his days jerking off and watching YouTube videos, plus occasionally attending seminars to issue cheap threats, Muthaura’s son does nothing else.

The question we ask today is, Why is Family Bank’s name appearing in all scandals? From Money Laundering to Fraud, Family Bank’s name is all over. The family bank will say this is a vendetta against them, but our Mega question is ” Why always you? ”

We all recall how Family Bank was used to Launder Billions stashed in Polythene papers and taken to former Jubilee Diva Ann Waiguru. Waiguru and Co should be in Jail for stealing from Kenyans.

The irony of all this is that the Government is still doing business with Family Bank. If the Banking Fraud Unit idiots want to follow the looted tax trail, Family Bank should be on top of the list.

It is alleged Family Bank acts as the conduit of/to the stolen Taxes, and the money is later laundered to the booming real estate sector. Daystar Journalists and bribed brown envelope journalists have always told you the industry is booming without telling you where the money is coming from. In fact, it is easy to track these thieves and repatriate the stolen funds or freeze their assets but ours is a country of looters.
The latest scandal details how a Customer Lost Sh.900,000 In A Fake Cheque Clearance Theft. His efforts to get his money back have failed as the bank that has now perfected their money laundering, and fraud skills is playing games.
Today, we ask the Priest-turned-CBK Governor to do something more. Njoroge should tell Kenyans why Family Banks’ name appears in almost all money laundering and Fraud scandals. We are not the corrupt Kenyan media that will praise you.

The EACC and Banking Fraud Unit should up their game but we are keenly monitoring these agencies that are good at extorting those they are supposed to investigate.