The 70 year old Sacco is teetering on the brink of collapse after a loan taken 43 years ago led to a series of events that continue to weigh it down.

The Union which draws its membership from a wider Kisii area (Kisii, Nyamira, Gucha) boasts of 200,000 members strong.

It also boasts of properties including lands, buildings and cars.

Under the then Chairman Samwel Omariba, a meeting held on 11-10-1978 under MIN NO. CM/9/78-79. The committee approved a loan of Sh16million to be borrowed from Cooperative Bank for the construction of the office building for the Sacco.

Co-op Bank however approved a loan of Sh8million. Under General Manager Job Ongeri Moturi, the loan was increased to Sh11 million.

Fast forward to 1997, the loans principle had accumulated to Sh33million causing the affiliate members to question the rationality of taking the loan in the first place.

The money issue caused major divisions in the affiliate members, that out of the 24 affiiates, 10 ‘distanced’ themselves from the loan.

The deviation of the affiliate members on the management of the union called the government
to institute an inquiry under the co-operative societies act Chapter 490 who’s recommendations dissolved the then committee and the senior management staff. The government the installed a commission headed by the then D.C – Nyamira Mr. Peter Saisi who later handed over to the then Kisii central D.C Mr. Mengichi.

A new management was appointed but despite the above changes, the co-operative bank loan was not being paid and the interest had reached an alarming rate. This led to elections to be held in 1995 and new members officials were now elected.

They quickly learnt about the loan as the bank gave notice of the intention to auction the union property that was in mortgage i.e. the 16 acres of land at Simbauti farm including the structures that were build using the said loan. 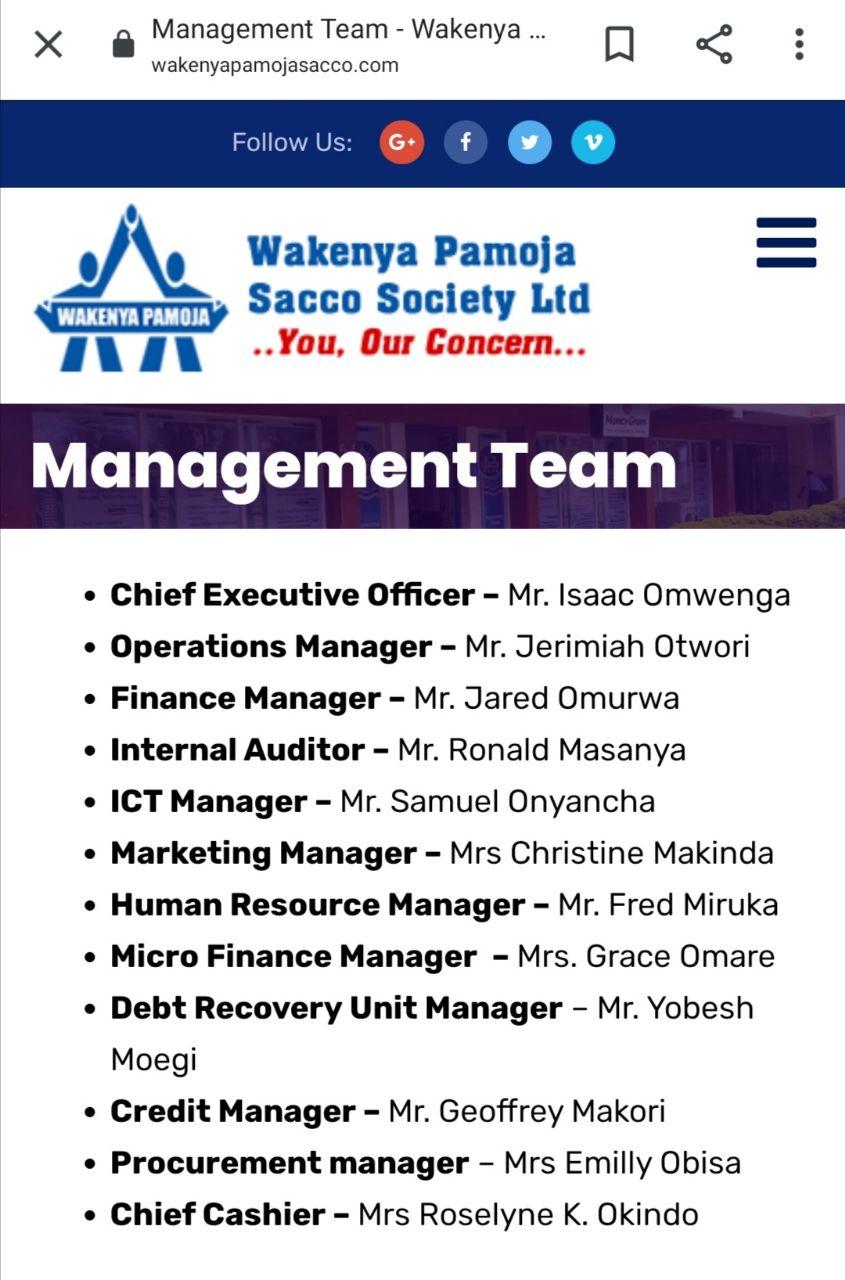 The Management of the Wakenya Pamoja Sacco

Following the above notice, the then management took the matter to the D.D.C -KISII of 6th March 1995, whereby the loan was discussed.  However, the same matter was deliberated at the special general meeting (S.G.M) of the union on 7th august 1997 which resolved to sell 330 acres put of the Simbauti farm land under MINUTE NO. 21/96/97.

Using minutes of the delegates, authority was sought from the commissioner for co-operative development (CCD) vied our letter:- Ref: KFC/CON/10/18/V02/613 dated 14th August 1997.

Authority was granted by the commissioner for co-operative development to sell by advertisement by open tender system which was carried out as per the daily nation of 16th October, 1997. amongst the tenders were prominent Kisii personalities.

With the sale of 330 acres, a total of Sh62,471,770 was raised after the sale, it was discovered that the proceeds from the sale were misapplied prompting a government inspection on 6th May, 1999 whose recommendations prompted the removal of the then management committee under chairman James Mangerere and the sacking of the then general manager Samson Onkware (now deceased). Thereafter, an A.G.M was convened on 13th August, 1999 whereby a management committee constituting Stephen  Ogamba as Chairman, Andrew Bikani  as Vice Chair, the National Treasurer Nyaundi Oirere, Johnson Momanyi as Hon. Secretary, Samwel Nyakoria, Andrew Nyaboga, Enock Obutu, Jared Nyakundi and Peter Okongo as Committee Members.

As a result of the above mandated duties, the management removed the purported purchasers who did not meet the requirement but surprisingly allocated land and are fighting to protect their fictitious interests through political avenues.

There were 31 creditors that were cleared by the SACCO in the 2003/2003 Financial Year period. Cnyakundi.com has the document to show this.

We also have documents showing debtors to the Union totalling over Sh51million.

We have in our possession, the balance sheet as at 31st December 2005; loans and advances to members, trade and debtors prepayment, bank and cash etc,

The documents shows that there’s a movement of Sh143,562,788 between Central Bank of Kenya and the Sacco that needs tracing.

This section of the expose starts with a letter addressed to the County Governor of Kisii County.

I paste it as is.

We have been retained by the public and the members of Nyaigwa farmers’ co-operative union limited to address you as hereunder:-

The Kisii coffee farmer’s co-operative union society limited was formed by a group of coffee cooperative societies which came together and formed the said giant union. The membership of the union is drawn for the said twenty three societies. The management of the Kisii coffee farmers’ co-operative union limited is drawn from the twenty five societies which came together and formed the giant union.

That sometimes back, before 1990, the officials the said union applied for a loan from co-operative bank of Kenya limited and continued to repay the same until 1997 when it became apparent that they were unable to repay the said loan of Sh33,000,000

On the 7th of August 1997, the officials of the union called of an annual general meeting and among the agenda of the said meeting was the loan arrears of Sh33million. The delegates resolved that 330 acres should be excised from Simbauti farm and sold immediately and proceeds therein should be used to repay the loan of sh33million. The delegates arrived at the aforesaid decision in order to forestall the auctioning of the unions property. The delegates agreed that each acre was to cost Sh100,000

The public and members have no problem with the sale and purchase of the 330 acres since they were sanctioned by the delegates and thereafter a consent of the commissioner was obtained procedurally.

Since 1997, they have sold land to more than 213 people without the authority of the delegates nor the commissioner.

We have further been informed that in the month of December 2017 and January 2018, they sold 30 acres to cabinet secretary FRED OKENGO MATIANGI and then back dated the sale agreement to hoodwink the members that said, the cabinet secretary purchased the land more than 10yrs ago.

We are further informed that Simbauti had a lot of cattle which used to bring revenue to the members of Kisii farmers rural Saccos union limited, they have gone ahead and sold the said properties of Simbauti farm without involving members and/or approval from the commissioner.

The advocate for Kisii farmers’ cooperative union the late G.J Mainye gave a detailed list of the 45 people who purchased the land in 1997 together with the monies paid to him and forwarded the same to the then chairman.

The public is also demanding that you seek for reasons of selling L.R NO.Block111/21- Daraja mbili. The Kisii coffee farmers’ co-operative society union limited did not have a debt to be paid to the bank which made them sell the said suit premises.

The public and members are of the view that no authority was sought from the commissioner
and any sale of land of the cooperative society sold without the commissioners’ consent is sold fraudulently. If the general meeting approved the sale of the property, it was to be followed by the consent of the commissioner.

We are writing this letter to you to demand the following:

It has come to the knowledge of the public that the land was sold to relatives fraudulently and or without following the laid down procedure as provided under the co-operative Act.

TAKE NOTE that unless we receive the documents demanded hereinabove, we have mandatory instructions to file suit in land and environment court, in Kisii and get a court order to compel you and the board to produce the said documents without further references to you whatsoever as to costs and other incidentals arising therefrom.