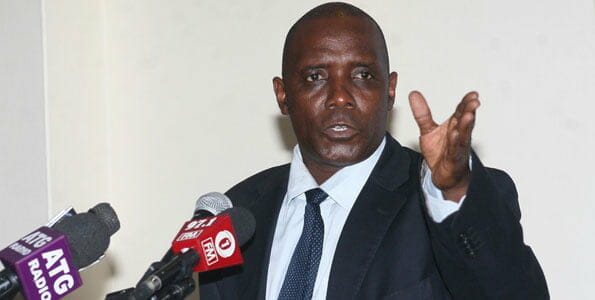 Msambweni MP Suleiman Dori has accused National Lands Commission chairman Mohammed Swazuri who hails from his constituency of talking too much at the expense of solving land issues at the Coast. He said it was disheartening that two years down the line since Swazuri came into office, he has achieved nothing Kenyans can be proud of and instead he is known for engaging sideshows with Lands cabinet secretary Charity Ngilu.
Dori regreted numerous cases of land injustices in Kwale county are yet to be dealt with even after the creation of NLC headed by Swazuri whose constitutional mandate is to tackle land problems and reform the sector.
“As Coast MPs, we are increasingly getting tired of Swazuri’s empty rhetoric. He talks too much and crowding people in his home yet he is supposed to solve land issues. If it is politics he wants, let him be open and we will deal with him,” he charged.
Dori warned Swazuri to desist from politicking. He said 2017 is still far and he should serve the people of Kenya first before seeking for other offices.
However, it was not immediately clear whether Dori meant that Swazuri intends to stand against him in Msambweni in 2017. However, should the NLC boss decide to contest, sources say he would be a major threat to the MP. Swazuri is in good books with Mombasa tycoons who are also said to have brokered his appointment to his current position and can come in handy to finance his campaigns to wrestle the seat. Swazuri is the husband of Mombasa county women representative Mishi Mboko. He was plucked from lecture halls of then Mombasa Polytechnic University College now Technical University of Mombasa and made NLC chair. It is claimed some Mombasa tycoons who had grabbed huge percels of land in Lamu county ahead of the building of the port had wanted Swazuri to protect them to get compensated but he was unable to withstand pressure after Uhuru Kenyatta intervened and the land was reposessed.