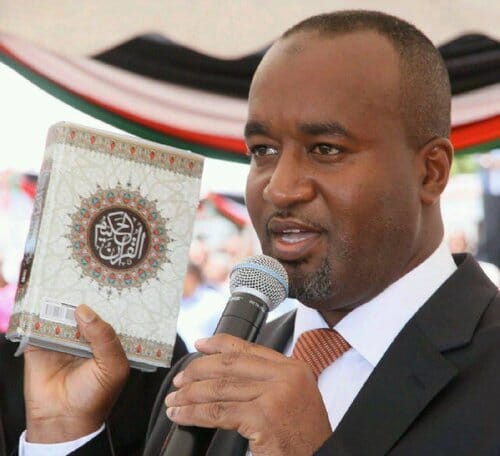 Last week Mombasa governor Hassan Joho gave a wide berth to function presided over by Deputy President William Ruto at the port of Mombasa after rumours started doing rounds in the seaside city that his Mombasa political nemesis Suleiman Shahbal was about to be announced as the new Kenya Ports Authority chairman.
Joho inspite of having initially confirmed he would attend the launch of new cargo handling equipment by the DP skipped the function altogether allegedly over apprehension that Shahbal would also show up at the function either as the new Jubilee catch or as the incoming KPA chairman. But as it turned out to be, Shahbal did not show up either and by press time, he had not been appointed to the post held by Danson Mungatana.
Instructively, Shahbal who opposed Joho for the Mombasa governorship seat on a Wiper ticket recently defected to Jap, a new political outfit bringing together The National Alliance and United Republican Party and on whose ticket Uhuru Kenyatta intends to give his second stab at the presidency in his final term in office.
“Rumours of Shahbal’s appointment as KPA chairman caused tension as the governor who did not want to share the same podium with his political opponent finally decided to skip the function to avoid any embarrassment. Joho did not have any problem with Ruto,” an impeccable source in the governor’s office said.
According to the official programme of the event at the port last Wednesday, Joho had been slotted in to speak after the cabinet secretary for Transport Michael Kamau who was then to welcome him to speak before welcoming the DP.
Sources said the governor would have been unhappy to see his political opponent appointed to chair the board of directors of KPA. For a start, the governor’s family has business interests at the port of Mombasa and the fear is that should Shahbal land the lucrative job, he would definitely use his new posting to undermine the Johos’ busisness interest at the port.
Highly placed sources however pointed out that if Shahbal is indeed interested in becoming KPA chair, he stands high chances of being appointed anytime since he now enjoys powerful connections in the corridors of power. Among the people Shahbal is dealing with and who are credited for having convinced him to cross over to Jap is leading industrialist Chris Kirubi.
Kirubi is a known associate of Uhuru. A company associated with Shahbal has landed a huge contract in Lamu and is it being speculated that powerful connections made it possible for the deal to succeed.
Meanwhile, there is canvassing for the yet to be vacant Kenya Ports Authority managing director’s position. The current MD Gichiri Ndua’s tenure is about to expire. Sources say that a group of influential Mombasa businessmen have proposed to State House the name of Ocean Freight East Africa managing director Issa Muslim to be appointed, saying the port of Mombasa needs a person from the private sector to steer it to a world class port. But other sources say transport cabinet secretary Michael Kamau wants the tenure of Ndua extended for a further three years to supposedly oversee the expansion of the container terminal.