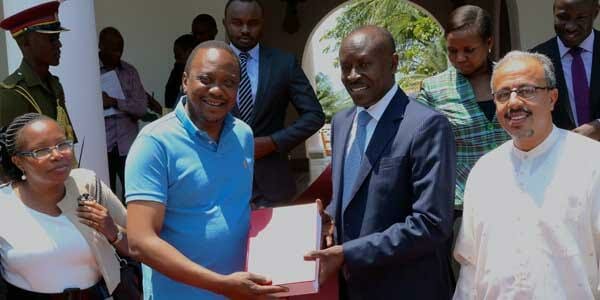 We recently posted an article quoting a director of Buffet Park/Tamasha, where he lamented President Uhuru Kenyatta’s hand in the closing of the establishment, that had been in operation for over 20 years. Sources within the National Transport & Safety Authority (NTSA) has intimated that police had been intentionally positioned in the Kilimani area, at the instigation of Nigerian owners of Kiiza Lounge linked to Statehouse shoddy-deals. Indeed during the recent so-called state visit by Nigerian President Muhammed Buhari, his delegation and family members visited Kiiza Lounge, to pick-up loose Kenyan women looking for a quick buck in exchange for sex.

This week, a row has erupted in Eco-Bank Kenya, where the bank is being accused of employing expatriates for jobs that locals can execute perfectly. And indeed, Kenyans have every right to complain because we are targets of xenophobic attacks in all those countries, so we cannot be the country that blindly allows foreigners to trample over our interests.

Ecobank has eight expatriates in its executive suite, up from two three years ago. Mr Kassi, who replaced Nigerian Tony Okpanachi, three years ago is Ivorian and it is under his leadership that the number of expatriates is said to have more than trebled. Head of technology and operations, Didier Koffi, shares nationality with the managing director while procurement is headed by Ivan Asiimwe from Rwanda. Briton, Gloria Byamugisha, is the head of human resources and also serves as regional head while Ugandan Nuhu Kanyike is in charge of cards.

So how did Eco-Bank get away with all this? The obvious answer is StateHouse and the bank’s linkman, Jairus Mohammed Nyaoga is our Person of Interest. We profile him and his links to President Uhuru Kenyatta, the Eurobond Heist and draw a general thesis on why Eco-Bank think they are untouchable in Kenya.

On 1st July 2014, Eco-Bank Kenya Limited named Mohammed Nyaoga as it’s board chairman, news that should have ordinarily passed by without much hulabaloo. But how does Eco-Bank relate to the current Eurobond crisis where the Kenyatta family wants to execute a heist of a billion US dollars in-order to build a Tatu City-like development in the family-owned Sukari Ranch?

Mohammed Nyaoga started enjoying the goodies from The Government of Kenya when he represented the Independent Electoral and Boundaries Commission (IEBC) at the Supreme Court during the 2013 presidential petition. During the petition, Nyaoga described the allegations by the petitioners as speculative and perceptive requiring rational, consistent and credible evidence to the satisfaction of the court. He further cautioned the Supreme Court against throwing the country into a constitutional crisis when deciding Presidential election petitions. His arguments carried the day.

He was then appointed chair of a taskforce that formed to probe mining licences by the then Cabinet Secretary for Mining Hon. Najib Balala. The taskforce was set up in August 2013 to probe the prospecting, exploration and mining agreements issued since January 2003, and while many other applications by local investors like Cortec Mining owned by Jacob Juma were kept pending, Nyaoga and then Mining Minister Najib Balala were bribed by Nigerian Dan Ngote to fast-track his license.

Then came the Commission of Inquiry into the possible dissolution of Makueni County where he was appointed the chairman.

Nyaoga was approved by the National Assembly as the chair of the Central Bank of Kenya Board and was sworn in swiftly after. Under the revised rules that the Treasury introduced, the CBK chairman, who unlike the Governor lacks security of tenure, will generally oversee the working of the country’s top bank. As board chairperson, Mr Nyaoga will check the performance of the CBK Governor, determine the bank’s policy (other than formulation of monetary policy) and review how the institution uses its resources. Previously, the Governor chaired the CBK board meetings and the new rules were customised to allow Nyaoga leeway in CBK. Recently all press-statements as regards to Eurobond were not authorised or signed-off by the Governor but by Mohammed Nyaoga.

All these goodies he is enjoying is because his law firm is jointly owned with the Attorney General of Kenya Prof. Githu Muigai.

A brief history on Mohammed Nyaoga and Eco-Bank Kenya Limited.

Early July 2008, account holders at East African Building Society received their statements in a very a special way. Unlike in the past days where the bank was sending statements detailing the performance of the customers accounts. This time round the bank had an additional note; a letter from the then managing director Philip Ikeazor

In the letter, Ikeazor said: “On 16th June 2008, EABS Bank Ltd name changed to ECOBANK Kenya ltd which is part of the ECOBANK group.” With this sentence, Ikeazor announced a transition that was widely expected to change the business equation in Kenya’s banking.

But that was just the beginning of the bank’s introduction into the Kenyan market. At the end of the same month, the bank invited the media and the banks customers to witness the unveiling of the Bank’s new board.

The board chairman was Peter Kanyago, a close Kibaki confidante and Chairman of Kenya Tea Development Agency. Gina Din Kariuki, founder of Gina Din Corporate Communication was also named as a member of the board. The other member of the board was Mohammed Nyaoga, the main person of interest in the Eurobond scandal.

With increased communication and trust with the Qatari’s, Mohammed Nyaoga was able to open a channel of communication by September 2014, on a mutually-beneficial basis as the Gulf investors working with the strength of the Qatar Sovereign Fund, were eyeing a stake in both Kenya Commercial Bank and Kenya Airways.

Kenya’s Eurobond offering had two prospectus dated June 19, 2014 and November 28, 2014 appearing in the Irish Stock Exchange Debt Security Documents. The first did not mention QNB but the second did. Timelines and occurrences detailed above offer insights on the changing dynamics, adapting to President Uhuru Kenyatta’s need for a vehicle to channel public funds for his family’s use. An because Eco-Bank’s primary Qatari shareholders  helped President Uhuru Kenyatta launder Eurobond money, the bank thinks (and rightly so) that they are untouchable.