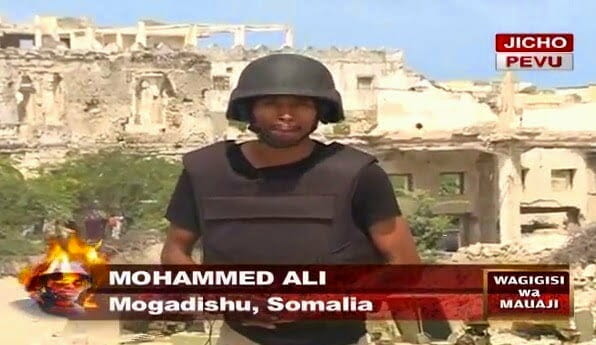 If you want to kill a dog, accuse him of having rabies, goes a French saying. For a good period of time, the senseless, fearless investigative journalist Mohammed Ali, better known in the circles as Moha Jicho Pevu drawn from his facts hitting and explosive expose piece, Jicho Pevu a programme that has since revolutionized the Investigative journalism in Kenya. Moha has become punching bag especially for the reigning regime’s leaders and their followers.

The indomitable journalist, in numerous occasions have been labeled a terrorist sympathizer from what the system’s cohorts want him to be seen as given his exposes that have criticized the government and poked loopholes in the fight against terrorism. This ranges from unwarranted arrests of Muslims to extrajudicial killings moves that he has vehemently opposed.

Death threats have become order of the day for the young defiant journalist who proves to be a thorn in the flesh for the government. He’s been perceived as a state’s enemy exposing him to attacks from jubilee’s chauvinist. The Latest attack came from Interior Security PS Nkaiserry during recent discovery of a mass grave in Mandera, the CS accused Moha of liaising with the Alshabaab and propagating their agenda, he went further demanding the journalist to ask for forgiveness of which he courageously dismissed standing his ground on living the truth. All these attacks yearn for the biggest question. What is it with Mohammed Ali that is making the jubilee government overwhelmingly disturbed. According to close sources to the highest office in the land, several schemes have been dispatched in a bid to discredit one of the most trusted journalist in Kenya owing to his undisputed investigative pieces.

Why would they break arms to discredit him? Inside sources confirms months of speculations that Mohammed Ali is arming himself for entry into active politics which means he’ll dump his journalism career anytime soon. His anticipated entry into politics is giving jubilee’s strategists hell of a time as this would change the whole picture and how politics is played in Kenya. Moha is seen leaning more towards the opposition leader Raila Odinga who’s also pumping to have his most crucial shot in the incoming presidential elections. The government’s operatives are more than shaken that Moha’s entrance into Tinga’s team will not only change the campaign game but also undo months and years of their ‘hardwork’. While it’s still not clear where Ali will be vying, sources close reveal he will be going for Nyali constituency seat. However, what’s giving the government’s wreath is his relevance in the larger national political scene.

There are genuine fears that Ali’s entrance into politics would shake the Muslim voting block and reshape their voting patterns. It is feared that his defiant voice will be more relevant to the discriminated Muslim society who feel less Kenyan and form a bigger voting block. Currently, the Muslim community lack a visible vocal advocate for their rights a void that Moha can easily fill and own. In the case this happens, the Muslim voting block will shift allegiance and now you see why the system is worried.

The Muslims have genuine issues they’ve been crying out on from unwarranted arrests to extrajudicial killings to isolation in development especially in the North Eastern regions which is also hit with lack of ID issuance epidemic. In general, the normal Muslim in the community has a genuine discriminatory issue to raise. These leaves them vulnerable to any strong voice to fight for their rights and space in Kenya, this is where Moha comes in and hell for the Jubilee government. Similarly, the youths, who forms majority of the population in Kenya and also eligible voters would easily identify with Moha. There are fears that a revolution would be sparked and who else would lead such a course of not fearless, respected head as Mohammed Ali. The youths of this country have often been told they’re the leaders of tomorrow, a day that never came and now going for the leadership posts themselves.

Have you ever thought the impact it would make if the youths of the country rose above limits to bring change? All that is needed are young blood courageous enough to start the fire and this what worries the jubilee operatives most as Moha seems from his frequent declaration that he’s at war with the dragging regime. They’re afraid he will influence the youths to rebel against the sitting government and gunner enough votes to ouster them from power. In the final analysis, Mohammed Ali has a national trustworthy face, thanks to his excellent jobs on the media that has earned him the trust from many Kenyans. Jicho Pevu, a show that he pioneered is seen as the truth speaker in Kenyan media, imagine that effect on politics. Moha as a public figure, currently enjoys a national level look, this will fuel a major boost to Raila’s campaign and duel major pain to the government who will now have difficult time in countering his influence.

According to talks in the CORD corridors, Moha is expected once making it official to joining politics to head a revolutionary team that will hold the government head on as the electioneering period catches fire.

There is unease in the government’s circles that Moha’s face as a trusted public figure would deal the jubilee team a major blow especially in the nation phase. Despite all the threats and attacks from obvious quarters, the fearless journalist is not getting off his seat anytime soon. His pursuance for justice that has put him in the bad books of the government doesn’t seem to be catching cold any minute as he comes out more defiant towards the current regime which he believes is dragging Kenyans back to the bad days. Should Moha be a worried man? I end it with his own words ‘You can’t kill a dead man, I’m ready to die. We will get back this country to where it should be’ “We will make this country great, one day”.